Crabs in the rain

I know a thing or two about crabs. Firstly crabs can’t see well in murky waters. So if you fill up a crab hole with cow dung they are sure to come out of their holes. Secondly, it’s not the cheliped which is the juiciest part of a crab, as one sees in all the travel and cookery shows, but it’s the body which is a taste apart. I think I know one more thing about crabs; I know how to catch them.

I think it’s almost a decade now since I caught a crab or to have touched a live one. Back then fishing was our main activity but now and then we used to do the crab thing as well. As soon as the monsoons arrived we felt the tickle starting in our hands. But we used to hold on to it until we have seen a few good showers or even a month into the monsoon. And then when there was a let out in the rains we had to answer the call of nature. There was no method or process to decide upon whether we would go fishing or do the crabs. Maybe somebody would have seen a crab or two in the garden or one near a puddle or pond and we would get going for some fun. We didn’t need any special gears for this act and this was blessing as we would not raise any suspicion when we were slipping out of the house. It would be usually in the evening, when we would be allowed to go out and play and we would go looking out for little ponds or water bodies around the road side. Bhopal, unlike Bangalore, was blessed with a lot of open spaces and un-encroached land and we would find plenty of sites to look for the little creatures. But what would be difficult to find was cow dung; the means to our end. Usually the sight of cow dung would be ubiquitous but during monsoons, with the cows and buffalos confined in their sheds, it was difficult to find these miraculous excreta. So our first task was to look for and find at least a plastic full of cow dung before we started the procedure because if we were found wanting for it then there was no other substitute.

We would then start looking for a pond, which would not be very deep and would have just started accumulating water from the recent rains rather than being a permanent fixture. We would carefully approach the site and observe for sudden flurry of activity on the corners of the pond. Crabs are very shy creatures and the moment they see movement around them they would run for cover. They would make a dash for the holes usually filled with water and we would carefully mark those holes knowing that we have targets inside them. The other reason was to be sure that there is really a crab in that hole and nothing else, like a snake. Each person would then pick his share of cow dung and position against a hole depending on how big a crab one saw running into it and how big the hole is. It would be ideal if the hole is not fully submerged under water because then when we start pumping cow dung into the hole it would start floating out into the water and around rather than staying in the hole. It’s better if the hole is filled with water till the top but not fully under water. We would slowly start putting the cow dung inside the hole and mixing it with the water inside. The idea was to make the dung reach deep inside the hole close to where the crab is holed up. So we would often use a stick to push the dung deeper and deeper. Once we are sure that enough material has gone inside and the water has turned amply murky we would stop.

From there on it was a waiting game. We took a hunched position over the hole, keeping really still and looking for movements or bubbles inside the hole. It would be a really long wait because the crabs would have got terrified because of all the pumping in the hole and would take a lot of time to come out, suffocated by being in the dung mixture. We would stand there, not even speaking to each other, with just sign languages and keenly observing any sign of them. We can go around for a walk and come back but then as soon as we approach the crabs would run inside the hole, to the deepest corner. The idea was to not really see the crab coming out of the hole but to look for movements which would indicate that the crab is somewhere near the mouth of the hole and with one shove of hand into the hole we should be able to catch him. While mixing the dung into the hole we would have gauged the twists and turns in the hole and would be ready to push out hands into the hole in the same way. This was the moment we cherished the most. The moment when the hand dashes into the hole, touches the body of a crab and just pulls it out. Often we miss by a whisker in just touching it and not being able to get a good grab, or to come out with a leg or two or to get the fingers pinched by the chelipeds. But the holes being so small it doesn’t allow space for a free fight and a little bending and twisting mostly does the job. The best sight in the whole affair is one crying out that one has caught a crab and the sight of the hand coming out of hole with a crab dangling at the end. Sometimes there would be enough drama around one hole, with the guy shouting that he has a monster crab biting at his hand and then all and sundry will rush by to give suggestions on how to extract the tough guy. In case if what get pulled out turns out a petite little thing then the guy is hooted to shame and ridiculed until he redeems himself with a big one. If in case we catch a crab which is big and shows off a lot of zest for biting and running then a quick throw on to the ground renders him motionless.

We would continue catching crabs until we got our carry bags filled or if the sun went down or if we had being away from the playground long enough to raise suspicion at home. Initially mom used to get adamant when we used to get the catch back home. She used to be scared as to from where we got it and how we caught it. We used to make stories that they were all found alongside the road. Revealing to her our methods would have surely led to an escalation to the higher authority. So we used to cook the crabs at the neighbours. But subsequently mom relented and we had crabs cooked the malu way, once or twice. Now when I see all the crabs in the super markets I don’t feel the urge to buy them and cook, maybe because for us the act of catching was the high part and not seeing it served on a plate. But I am sure Bhujji would post a recipe of it on our food blog - http://ooonuready.blogspot.com/ someday.

Recently when I was discussing this post with a friend I was told few other ways of catching a crab and also reminded that the monsoon has arrived. I am sensing the same tickle in my hand. I think this post will have a sequel.

P.S. - The image below is for representation purpose only. It should in no way be used to assume the size/shape/appearance of crabs that the author has described in the post above. 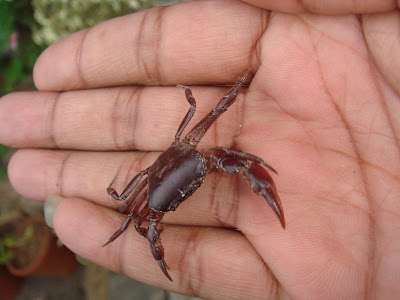