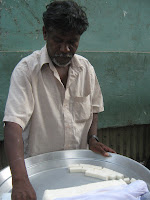 I have always been to air-conditioned eat-out joints all my childhood. Even the shawarma restaurants I had been to never served it the way even vada pav vendors here do. My life in India introduced me to tidbits’ on the street. I soon discovered there were two kinds of people, irrespective of class and caste, when it came to food. One which associated class with food and in the name of hygiene missed out on the best tastes in life. And the others whoevenrisked a dysentery to savour the best, even if it was on streets. I have often seen foreigners, elderly and rich upper class too savouring the local street stuff. I have seen many others who freak out even at the thought of having a bread omelette from a handcart.

I was frustrated after a day’s shopping on the streets of T- Nagar. What irritates me about this street is the madding crowd, resembling a stampede, running crazy in shopping spree. It requires peculiar skills to traverse these paths on weekends. Mom tells me it is like Mumbai locals, people push you in and out and you need not bother walking. And shopping with family was always a nightmare to me. I hate the glitters and jitters they choose and it makes me crazy deciding between colours and collars.

My refuge at such times is the street vendors selling tidbits. I try them all despite warnings from my friends not to trust the unhygienic stuff they sell. That day too I could see salted mangoes, gooseberries, fried cashewnuts, wild berries, Bombay mithai and what not.

And that’s when I discovered this vendor selling ‘manna’.

I saw a mount of white jello like stuff which looked like paneer. The seller was cutting it like pedas . He said it was made of the first milk, mostly that’s rich in fat hence not used at home. This sweet was totally new to me and many others too. He gave two names in Tamil and Teulgu which I don’t remember. The Tamil one was something like “sinnapal”. Well I call it ‘manna’ hereafter. Why I decided to call it so was because when I read about manna in the bible I formed a mental image as a kid and this was something closest to that image. And it was so powerful a taste to have rummaged the attic of my memory and brought up this image.

My brother and sister gave me their weirdest look which could qualify for the tenth rasa ( In classical dance after navarasa there is no tenth one) which proclaimed me as a dehati kuntry fellow, who was more excited at the sight of this thing, made of water from which gutter than at the sight of sarees worth thousands. Mom was all game and so we shared a bite. It just melted in my mouth and was not too sweet, just the way I liked it. There was something about the way it tasted that made me feel it was pure and hygienic unlike any milk peda or sweet I had ever tasted.

For those of you who have tasted stuff from vendors on the street, there is something about the taste that makes you want for more. And I enjoyed every moment savouring it, risking dysentery, which my sister was worried about. Now describing a taste is a tough exercise. I’ll try my best. This thing was soft and clay like. It had no added sugar but it was still sweet. It tasted like paneer but was jelly like.. Rs 5 for that piece would look too much considering other stuff you could buy for the same cost. But all that reasoning happens when you’re done with it, because it’s too irresistible to say no to.

When I asked him if I could have a snap of his delicacy he felt proud and said I could. So here he is. For those in Chennai, he is right outside Nalli silks, at T Nagar. And next time if you go that side, tell him you saw his snap here and that I am big fan of his. Or ask me out, I am always game for a second serving.

Try your luck and taste ‘manna’

For some, pleasures in life wait at the corners of streets.