"Uncle, could you help me open this gate", it took me sometime to process these words, actually the first word. I looked on both sides to see this uncle whom the little kid from my building was asking for help. Then again the kid said, "uncle, please help me." And this time he looked straight into my eyes and there was no mistaking the fact that the 'UNCLE’ was me. I felt as if being hit by a meteorite, straight from Jupiter. I always knew the Jupiter in my horoscope was up to something. I helped the kid with what he wanted and as no good deed goes unpunished I got it once more, "thank you uncle". This was as much I could take in a day and I ran for cover.

That was three weeks backs and it happened again yesterday. I thought there was something wrong with the kids in the building, but when the grown up guy at the grocery shop said, "please give me change uncle," I realized that this problem had manifested itself beyond my building compound. Why do they call a guy, who is still an year away from thirty, uncle? I don't wear a moustache (sorry guys out there with one) neither do I have a bald patch anywhere (sorry again) nor am I married (sorry sorry sorry). So then what part of me makes me an uncle? Not very long ago people used to call me Chotu, then a few years after they called me Bhaiya (bhaiya has a complete different meaning in Mumbai, so beware) and now they call me uncle. This transition happened so stealthily that I was caught like a rabbit in the headlight. But this one had gone too far and I decided to do something about it. So after burning a lot of mid night oil (anyways it costs less per barrel now) I have come up with this formula which is going to shut up all the kids. So brethrens (mustached, bald and married) I give to you the one solution that will remove the terms "uncle" from our lives, once and for ever.
So here is the formula 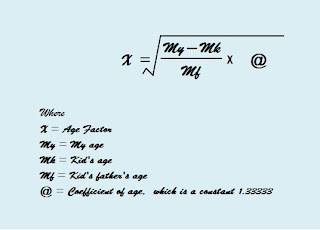 This might look like a complicated equation but I am told that children in kindergarten now learn vectors and algebra and therefore this would not be difficult for me to explain it to these kids. Armed with this lifeline I ventured out and caught the most harmless looking kid and started explaining him the basics. Everything was fine until it was to do with the kid's father’s age; the kid wouldn't know of it. So he spontaneously called out for his mom (as for every kid its - mum knows it all). I thought this is now getting complicated and I should be prepared to cover the whole thing with another story. But what came next caught me off-guard. Promptly the mother steps forward and asks the kid-"beta, did you wish uncle Good Morning today?" Even before the kid could say 'no' I heard a big NOOOO going in my head. What? The lady just also just called me uncle. I felt as if being thrown off from the top floor but hitting the ground instantly; there was no falling in between. I couldn't believe that the lady, who probably looks older to me, plump as a pumpkin and has started to show grey, asks her kid to address me as uncle. This was like Iran calling the Vatican a terrorist state. I realized I didn't had a formula ready for the lady so wisely said the good mornings and good byes and decided to deal with this another day.

I started climbing the steps, back to my apartment, thinking that one set back is not going to deter me from this noble cause. Half way through I felt uneasiness in my legs. I felt the uneasiness from the calf muscles rising upwards. I persisted and climbed another floor; the pain starting to increases with every step. I stood and took a breath and with the same breath came the realization that maybe age has caught up with me or maybe it has taken a lead. I called for strength from the powers above and somehow made it into my apartment. I sat looking at my legs and thought; maybe it’s time to come down from my high horse and accept the uncle tag. What kind of a young man would not be able to climb those silly steps? There was a time in history when I could have beaten Usain Bolt on these steps. Maybe the kids are able to see through me and I am not. With a 'sigh' I let the feeling to sink in. I suddenly felt ten years older.

But my friends it’s not yet over for you. The baton for this noble cause is still up for grabs, the formula is still not patented and the fountain of youth awaits you on the other side. Who knows some day the world would remember you as the one who championed for the cause of the "not yet uncles." As for me, I have realized that this wine has now aged, though very soon and with much persuasion. Anyone interested in a rare, 1980, vintage, sparkling, white ............Anyone????
Posted by Who at 11:25 PM

I thought you wud edit this considering your are getting married soon.

Nice post .... can feel ur angst uncle ooops did I call you uncle??

man... wat's the point even if sme1 is interested??? i thought ther is no space for ny1 else, n r u proving me wrong huh??

i thought i'll call u bhaiya after marriage (obviously urs not mine :P)but it seems tht i'll have to find sme nice tags like appooppoon, thatha, etc. (ask ur co author for meanings if u don't understand :P)...

n shall we give sme1 sme training to get along with the tag "aunteeeeeeeeeeeeeeeeee" which i hope is awaiting in mumbai....

n yeah one advice as my final words for Mr. WHO...don't let ny1 in ur apartment read ur blog, coz thr will be people who dont have a good sense of humour n tht leads to a possibility of u getting....no analyse the situation for urself and find a soln, coz it's ur life's business dear business analyst :D