Two cups of tea and a sex worker 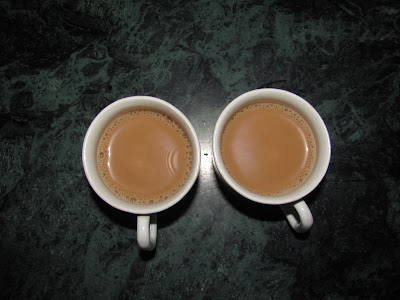 If you ever travel alone, never chose a stranded railway station, especially in the peak of the monsoon. I was waiting since two hours for a train which was running late by three hours at Karwar. Karwar is the border town between the states of Karnataka and Goa. It is a coastal village and why I was there is a stupid story.

I worked at Dharwad and only one train connects Dharwad to Kerala was Kochuveli Express. This train was stopped for some reason only Lalu Prasad Yadav and his family (read railway ministry) would know. Travelling to Kerala was a nightmare. We either went to Bangalore which was ten hours from Dharwad and took a train or, we went to Karwar.

So what do smart people like me do on working days? They end up lying they have stomach pain to get a half day and take a bus to Hubli and from there a bus to Karwar which is precisely four hours journey and voila! Netravati reaches me home 10 am next morning. (Netravati is a regular train from Karwar so in times of emergency I travelled from Dharwad to Karwar to catch this train.) Definitely a painstaking but adventurous journey with fishermen folks and each time I have met people who made my journey worthwhile.

This was one such journey. Let me also tell that you not everyone is crazy like me to take this route. You either find petty shopkeepers, navy men or students at this station. On this particular day in the rain I had no one to share the entire station except someone whom I mistook for a teenage boy.But he was the sole soul I could talk to in the delay in my itinerary. After repeated hellos, he turned around and I realized it was a she “Transgender”, I told myself. I needed company and did not wanted to fall asleep. To break the ice, when I asked, what she did, she nonchalantly replied, “sex worker, and mind it madam not a prostitute”.
I was stunned. It was raining heavily, I was stranded at a railway station and my sole soul for company tells me she is a “#*@#”, I could not bring myself to pronounce it.

“Do you love yourself?”, she asked. It was not a strange question. I had asked it many times to my subjects while administering questionnaires on self esteem. But, I never dared to ask it to myself. “I love myself”, she declared.

Her lips made a curve which could be mistaken for a smile but I qualified it as a smirk. Now you would wonder how a sex worker could say this, won’t you?From the beginning of our conversation, it was she who asked questions and gave answers. I was just transfixed to her.

Chanda, that was her name. She was barely 16 and was soon to be transferred to a women’s home as she was no longer a child to be retained at the rescue home. “I ran away from there. I don’t belong to that world, I don’t need rehabilitation”, she said. She wore jeans and a top and had her hair cut like men. She hated dressing like women. She said she often fought with other kids at the rescue home and was addicted to pan and alcohol.

“I was married off to a guy when I was 14. He was 26 then. He never did anything to me but took me around and sold me to men. Before I could learn the word ‘pimp’, he left me. I was ruined, so I decided why not make money out of this mess. After all I love myself and if I enjoy it they can’t misuse me. I was happy madam, I dictate the terms of my life. They can sleep with me but everything comes at a price”.

I had read case studies, read everything on counselling tips but when I was listening to her something was troubling me. I felt insecure of my womanhood. I felt guilty of having what she did not- a good family, education, security and love. I was amazed at her viewpoints and I felt I was doing the wrong job treating people like her as guinea pigs for my projects.

“I have seen all kinds of bastards”, she continued.”Some even tell me I am like their daughters, which makes me wonder what they do to their own daughters”. I was silent. I did not twitch a muscle but kept listening to her silently. I was not asking her anything. For a moment I suspected the legitimacy of her statement and then felt ashamed for thinking so. She seemed to have developed a mastery in delivering her narrative that I felt affectation in her mannerisms.

“I miss the good old days. It was fun than all this stitching, pickle and papad making they taught me. I don’t think I can be rehabilitated and I won’t ever be a wife”. She was calling it fun , was she hopeless and denying herself what she could get- ‘a life’.

“You might think what a characterless girl I am, right?” I smirked.
“I never knew what married life was like and I never had it though I am technically married”, she said.“I don’t think I can end up cooking and cleaning and worshipping a man. They hurt me once and now I seek revenge by making them pay for it. Yeh dhanda hai apna”, she said.

What does a society expect from 16 year olds. Psychosocial stages of development says it’s adolescence and children mature at this age. They choose higher education, form values and viewpoints about life. But how do you decide what is the right way of living? Chanda said she had no morals, she had learned the world the hard way and she had chosen a career and she felt sex work was no sin. “What about devdasis?” , she argued, they were respected and considered well learned. I was sure all this was indoctrinated into her during her initiation into this trade or should I say profession? The intensity of the rains and her words matched making me feel their sharpness.

“We are human beings”, she continued. “If a cook satisfies your appetite you are happy. He is a respectable man and earns a lot. We satisfy appetites too, why are we disgraceful. All your great men come to us hiding from the world.”

I was getting uncomfortable in my seat. A social worker is not expected to give a moral dictum and she was going overboard already. “Madam don’t even try advising me. Not even Khuda ke vaaste. Khuda nahi hai , hote to mujhe bacha lete, she said.

An hour and half passed in our conversation. I looked at her, she was 16 and I was 23. We were both women from two walks of life. Was she more strong and optimistic or was I stuck in a society that made me feel I was free ? I don’t know. For the first time I kept my morals aside and tried seeing the individual in her. I smiled, she reciprocated too.

“Chai ho jaye?”, she asked,“Meri treat aapko”. I smiled accepting her offer. Aap bhi kya yaad karonge ek veshya ke saath chai pee liya tha kabhi (you will always remember this tea with a prostitute). I got shocked for a second at her audacity, but she continued talking, this time like a sixteen year old on fashion and make up and dreams and…
Posted by The quirk at 9:30 PM

Renny my blogs are not my sole effort , I have a partner who edits them so they look this way. So hats of to my guruji.

renny: a lot of things chechi writes is from her experience of what she does and that's what adds depths to her writing...i am sure the rainbows looks nice when it's with the rains....i hope you agree

@bhuji... guruji salaaam....!!
@who...our lady, although young, has done and been through so much in life, she can write volumes i guess..!!

Yet another post of urs makes me think... the tinge of melancholy really elevates the impact....

Must say.... such rich experiences in life... and being so expressive helps others share it too....

wen i say dat 'it was a gr8 post'...trust me im not adding de element of exaggeration...

Thanx saritha :) I am happy you found time to read it leaving ur algebraic geometry aside for a while.

Hmmm and Dr Kochu I trust ur words coz I think doctors don't lie generally. I receive the compliments on behalf of the editor too.

Your narration is just awesone. Thanks for sharing this in your typical style. Keep posting more

these are ultimate feminine fantasies of bhuji and her guruji or whosoever. there are quite a lot of unconnected warps and being a research scholar bhuji could do her best to outperform that task. kudos bhuji.. spit out all those Zionist hunches as your feminist fans linger around

Thanx for the comment Anonymous.
If I know you please write your name next time. We could meet up for tea and then I can write "Two cups of tea with Anonymous"

I have outperformed in many older posts spitting feminism , plz read them and pour your wrath I shall post all those comments without holding them up .

As for my guruji, I leave it to him if he wants to respond :)

wat an experience! [of urs n mine reading.... but a bit too long]

ohhh thats a really tough question to answer ...
got a long list of philosophers, all most except the one you mentiopned! just read a few articles by krishnamurti thats all


sorry for the long gap to get here...me not fully settled yet to my new atmosphere n all ..

ok.. well, you are always on the train or in bus? interesting ..

'sex worker' those words take me back to Pune ... hmmm

reminds me of a stripper who said- "dont come to us thinking we need help. we dont want help.we like what we do."
interesting.

somehow our brains are trained to feel bad for people like sex workers.for "normal" people,its unimaginable to think that sex workers or people in a similar position can love themselves and actually like what they do.maybe its us, the so called "normal" people that live in a bubble.

It is an absorbing narration very well written.I intend to visit this blog regularly.
Cheers

Landed up in this blog during my random surfing of blogs, partly the title didnt allow me to skim without reading. A very interesting, rather provoking write-up questioning the fundamentals of value system. Often, we treat sex workers as sinners or sometimes we pour all the heart's emotions pitying their fate.
First time, coming across an argument wherein life is accepted as it is, though its abyss. A macro generalization of human psyche localized to life considered as immoral. And thanks for giving life to Chandas words in ur blog.

Hi, just happened to read this post...great... so what exactly are you doing your phd in? I always maintained that most of those who consider themselves to be educators and trainers and counsellors...blah blah...never can't stand even a day of life at the other end. The realization you had - about the 'guinea pigs'- is true. They know far better than us. I wish these counsellors had the humility to accept that reality.. Great post. Keep writing.