I wish you were my mother 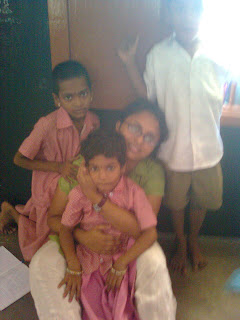 I just can’t resist writing about kids these days. My mind is always preoccupied with the school kids at my field work. Observing them for a fortnight now, I could close my eyes and say a lot about them; things that don’t seemed to have registered in my mind. I know for instance Nivedita hates the term ‘mother’ and Balaji would not sit still if Jeevitha is asked to sit away from him. Arvind seeks attention but if you say he writes well and if you give him a chocolate he can be silent for some time. Selvam has sores on his butt and cannot sit on the ground, so he hops around. Anushya lies about having a stomach ache, it’s either there are problems at her home or she is upset. Preethi beats kids and even bullies senior boys. For Aarti, I am “Shapadu bell time keeper”. The moment she sees me she needs to know when the lunch bell is going to ring? I never thought they would all be a part of my life and without me taking any effort to know them too personally.

I was making observational notes yesterday. The teacher had two classes to handle as the teacher in the next class was absent. It was tamil period and I was interviewing few kids. Yashoda suddenly came to me and asked the kids sitting next to me to move away. She had never aproached me before. I was helping a girl to pronounce “pambaram” and Yashoda suddenly laid her head on my lap. I did not bother asking her why but reflexively I tried stroking her hair. She had shaved her head and so was being called “mottai” (bald head). I liked her smile, she had two missing teeth in the front row. Yashoda was in 3rd STD. Since the new system was activity based and it encouraged students to learn at their pace, this was a mixed age class with students from 1st to 4th STD.

Yashoda was brilliant and always active. You either saw her with her learning cards or she was busy helping the junior groups. I withdrew my hand from her head and continued asking questions to other students. She slowly pulled my hand and placed it back on her head. I withdrew it again without noticing. She got up from my lap and started answering her card. She gave up soon and lay back on my lap. “Is the card difficult? I asked“No”, she said. I never felt she would give up just because she found a card difficult and even if she did I am sure she would not run to her teacher’s lap. “Any problems at home?”, I asked. “No miss”, she said. We were both silent. What if she wanted to be loved, maybe her mother was too busy to stroke her hair or let her lie on her lap. Most of these students came from broken families, parents who are labourers or domestic help. The kind of family they have is quite different from what I know.

After an uncomfortable moment of silence, with tears filled in her eyes she asked me “Will you sit with me when I have lunch today”? “Sure, why not,” I said.

Nivedita, a girl in 4th STD, who was watching this interaction asked, “Is she your daughter?” Yashoda got up and looked into my eyes. I was caught off guard. What would happen if I said ‘no’, especially when this child was upset? I paused for a second imagining if I could be a mother of an eight year old? Seemed like a difficult and out of place question when an eight year old was expectantly waiting for an answer. But maybe the answer could make her day. I smiled and carefully phrased it, “she is like my daughter”. And as if sensing the careful use of words and tone, Yashoda was silent for a moment and then said, “I know I cannot be your daughter, but I wish you were my mother”. It amazed me how she did not tried to be politically correct and was truthful about how she felt.

I never expected this when I began my classroom observations. I never did anything special for the kids except motivate them and ask them doubts I had about their learning. Did I emanate something all along? I did not want to be emotional so I got up to leave to the next group. I felt two little arms hold me tightly from behind. I looked down and saw Yashoda with her eyes closed. It was not admiration, I was not her akka then, I was sure of that. I did not ask her what happened because I was scared there was transference of daughterly feelings happening then but what I feared was a counter transference of motherly feelings.

People lie when they say you need to be a mother to feel like one. And there are times we take our mothers for granted. My mom always told me you would realize my value when you become a mother. As I read this post to her on phone I could hear her sigh. Perhaps that was an approval that I have qualifed the prelims for motherhood. Each time a kid at school asked me to sit with them, hug them or carry them, I did not do it because it was my research. I love them and a warmth sweept me then. I call it motherhood. My love for kids often earned me compliments that I would make a good mother someday but Yashoda’s statements echoed my ears as I left school that day. “I wish you were my mother”. Was that a compliment?

Hey its all about another world that i have never bothered to think about...so please share a lot on your angels...and do keep writing.