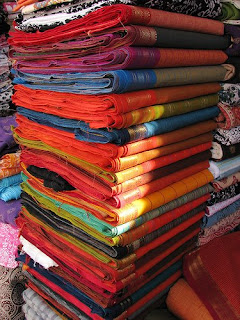 I hate shopping clothes precisely after 2007 August.Last evening I spend some time shopping clothes at cotton street after 3 years. My thoughts trailed back to 2007. I lost my dad that year. Now why do I relate it to clothes is a long story.Bear with me for a while.

Losing dad was not a shock to me,I was sad but it was something I was prepared for. I was brought up quite boldly to step in and carry responsibilities in adversities.

When I was in 6th STD mom had a surgery. Before her stitches could be removed we were informed she had to be re operated due to an infection. Things were critical and dad told me you need to be strong to take care of your younger ones and mom added, "dad wont be able to do it alone". She survived but I grew a lot than I should have in a single day ( something I believe is a problem now coz I don't relate to my peers ).

When mom called and told me I lost dad I was numbed for an hour but unlike others thought I was not upset with the loss. I was worried about things that had to be done thereafter, and I was unprepared for them. When I came home all I did I was run around for paper works and procedures. I had to get his body flown and I was determined not let him wait in an ice box at some mortuary in that desert.

Days were hectic. It was Onam season and a festive mood everywhere. I could never eat a sadhya with pleasure since then. At the passport office when we requested for an emergency passport for mom( her's had expired and it made me mad that she was so careless. Could not blame her for not foreseeing the circumstances either)the Officer Incharge a lady said ,"We are not here to issue passports for your daughter's delivery in the Gulf". Her anger was understandable those were the kind of emergencies she had ever seen. You don't get requests for emergency passports where a wife wants to get her dead husband's body on a daily basis.

Back home I was stopped by my aunts.The issue was my mother's clothes. Now had dad died at home the funeral would take place immediately.People would not flock in for 18 days to meet us. Now when people came mom who was always on bed was seen in floral pastel colours. Now that was a serious issue. I got a lecture on widows and sober colours. And maybe my Jupiter and Mars had gone on vacation so I was crazy.I was shopping black and grey in Onam season when women were going gaga over latest designs and colours. I saw mom run her hand over something colourful and feeling the fabric.She then left it back as if she had committed a sin. A scene like this in a movie like Deepa Mehta's Water would make an excellent trailer but, here it was my life.

I was back home when my aunts were telling my sister - you girls should wear dull stuff too. Now I lost it ( Jupiter returned from vacation). "Tell me one guy who goes shopping greys and blacks when his wife dies", I asked. "You made mom do all this , we got other issues to tackle I said", and left.Mom packed all her colourful dresses and stacked it in a cupboard. There was a tinge of melodrama to the whole process which to me was quite unnecessary with the complications already existent. After all ordering a coffin, doing flower arrangements and booking the grave was no fun and to top it when people remarked " How can unmarried girls do all this" ( No clue what that meant) all I could do was blink and make sure not a single tear came out.

Life turned so mechanical those days, people were eager to know the gruesome details of death, some wanted to know about the compensation, quality of teak wood for coffin. And then again advices to girls who were in charge of a funeral.They were not proud of us , they just felt sorry for us.

After the whole function was over I took Rachel my dog to the courtyard, of all those people there she was more sincere to her master, she sniffed as if searching for dad .We went to the terrace and sat on the swing, she was licking my tears of my face and I told her the stories of black and grey, she barked as if she agreed with me. It was raining and I cried as Charlie Chaplin said " I love to walk in rain so no one can see my tears".Unfortunately it was sunny at cotton street but I walked in the sun , tears gleamed.
Posted by The quirk at 1:23 AM

when i was standing in rain ... all drenched and water dripping ... i could feel the joy from within .... now reading this ...standing in rain to hide tears ....well..
neverhtless ...nevermind ..


ei your charming smile and profile go hand in hand ... both bring a smile on others' faces..

eiii it s time to move on ha?
maybe something lively ....
it s raining out there, na?
kcuh pani ho jaai

think Your closer to Your dad than anyone else of us

Piccard do I knw you? ur blog title is nice hope u read the book?

I'm so sorry...it was quite heart-breaking to read this. No words can erase the wounds, only time can heal but even then the scars remain.