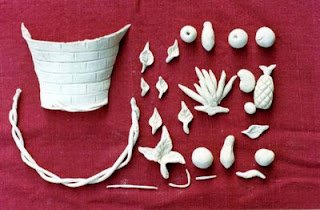 Teaching anything arty is tough job. When I say art , I mean craft work and don’t pamper yourself with ideas on art education and aesthetic experiences. I got no where near those ideas with my experiences last week. It’s sad how arts are undermined as something that could distract kids and give respite to parents. Oh no! Let’s not get into necessity of Aesthetics in an Anesthetic society.

I thought kids naturally enjoyed arts. I always did as a kid. So with the same old ideas in my head (someone told me I got lot of ideas which was hard to manage) I entered my first ever class on clay moulding.

I love kids and here I was blessed with 17 of assorted ages (4-9 yrs). Some things cannot be planned. So, despite being warned by friends that this was gonna be fun and terrifying I found myself unprepared.

I started with the general instructions as to how this sort of clay hardened with exposure to air. They seemed uninterested in physics and chemistry.

I moved on to our general plan for the next three days. Some heard and some did not.

I divided them into three groups and decided I would take turns with each group.
It was amazing how randomness still brought people with similar tastes because I could see some groups working together perfectly and others working individually in a group or was it the dynamics of group formation?, I don’t know.

Some made beautiful stuff but would not help the others nearby. I thought the whole purpose of the workshop was making friends but here they were all islands. Was it how this generation worked?

Most of them I figured out were single children and to my disbelief they were too comfortable in solitary work. When one in a group finished they would call for me clamoring attention. When I asked why don’t you help your friends nearby they frowned which to me meant ‘how can you expect me to do that’?

One group had a girl motivating the others to mould shapes and they took pride in themselves as the best group. Now this was an interesting observation. When the ‘We feeling’ comes in, things worked in a different way. But to perceive oneself as a group there always was the requirement of the 'other group'. So now crept in competition. “We made more pieces, we painted them first” and then some ego boosting sessions. I did not have the time and energy to propound philosophies so I thought it was best to leave them alone.

The very attitude of how this programme came to me is interesting. The organisers wanted to have the children occupied with something new yet less messy and I was easily available. My friend recommended me and they thought I would agree.
I had different plans. I had once asked the same crèche permission to observe kids and they told me they need to hold a board meeting and get permission. Now here I was getting paid to observe children :P .

Ever since I could remember I was in love with colours. Don’t know if mom and dad did anything in specific to inculcate this love in me but they definitely did not hinder my interests. I am sure there is no other activity that could release the pent up energy and creativity and I believed everyone could get arty.

But this workshop proved me wrong. I had taught kids individually and in smaller groups before but they were kids who were genuinely interested, they were not forced to go for a summer camp. I salute my kindergarten teacher it must have been a pain to manage thirty plus kids who kept shouting, crying and messing around.

By the end of the class I felt dizzy. All I could hear was unending permissions to wash hands, use the toilet, complaints on someone stepping on others' models, clay getting hardened or someone not interested in a particular design.

I wanted to believe I am a progressive teacher (Hail John Dewey!!) and would want the child to do “the doing as well as thinking part”. But very soon I realized if I had to show their parents they did something I need to make it for them. The more I resisted the carrots looked like peanuts and peanuts like snowman.

The attention seeking part really turned me off. A 4 yr old boy kept telling me “Madam I like your dress, I like your bindi, can you tell me the shop you got this, Madam can I always sit next to you”? In spite of my efforts to put up with a polite smile I had to yell at him to shut up. First time I found it rude, slowly I found it natural.

Resolution of conflicts is not my area of interest but it’s inevitable when you teach kids. Here you had too many kids wailing rather mould clay. I had an interesting conflict resolution session. A boy cried after breaking a girl’s model. I scolded him for doing it too and he started crying. I thought it had to do with my scolding. But the case was interesting.He was frightened by the girl.She said she would get him arrested by the police for breaking her model.

This was my first male harassment case where I had to play a guy’s advocate. Now the 4 yr old(my admirer) got so terrified that he was on knees begging not to call the police. He was hysteric and all over the place. It distracted all and no work was done for the next 20 minutes. It took me some effort to understand his fears for police and to stop his crying. When he stopped he started again “Madam I like your dress……:)” . I wanted to remind him about the police but I had to curb my sadistic dispositions. (I must admit I was like that girl in school. I would not waste any opportunity to make boys cry)


Now when you decide to teach kids anything get prepared for the worst. Your art bag needs lot more than materials. Peace and conflict resolutions skills, some sense of humour, loads of patience and varied critical and creative thinking skills would be handy to begin with.

By the end of the day the smiles you bring on each other’s faces makes your day worth it.
Posted by The quirk at 8:41 PM

with the kind of cheerful smile you have it wont be a tough job to attract kids around you ...

love with colors? abract? colors dont exist on their own ha?


looks like you got a sadistic joy in making boys cry ha? umm

Thanx Deeps you seem enthu over each blog. There are nearly 73 blogs behind u cud start commenting there too :P

not ethusiastic, but your style is simple yet arresting ...
i went thru a few of them ...
they keep the readers busy either with thier minds or hearts ...

as for the flattery thing, well, it wasnt, if that smile really belongs to you..
after all one who finds joy in making boys cry shouldnt bother much about a little flattery!! na?

maybe that mama was a right man in wrong place ...
psychological treatments in itself are not bad, but yeha, one cant always test fire on human mind ...
well, you watched munna bhai ha?
he wasnt a Doc, but he did it... it s not always qualifications that matter i guess...


interesting!
i dint know such things happen inside a girls' hostel!
but we all go thru incidents of differnt color n taste..
life is like that


from the edge of wedding bells to school bells ..
not bad a flight with a fighting attitude..
resilient that you are...

your memory is so vivid!
not Hist teacher ha?

just wondering if you love this word 'brat'!!

I meant u cud comment below the respective blog.No comments on flattery I rest my case.