One who fight's Destiny

She was sweating profusely. Working in special care baby unit meant you were always near incubators and heaters so naturally it was hot. But the contractions every 10 minutes was not a nice symptom. "First baby"?,asked the doctor."Yes doctor", she said. "Strange that your baby is in a hurry", he said ."But 5 months is way too early". "But I feel the baby pushing down" , she said. That was the first false alarm. After countless nights of staying awake in panic, expecting the baby to come out, everything seemed normal. She smiled and asked the baby."Why this hurry , you might regret once you are out".

She was also worried because it was time to shift from quarters. They had to now look for a house. Having a baby meant vacating quarters and finding a bigger house and 5th month was too early.
Duty was already painful with the new changes in the body. Taking care of new borns was part of her job, their smell, their changes, she knew it all but this was a new feeling.
"There is something peculiar about your baby the doctor said, your baby is in a hurry".

Baby shopping was an exciting event , first baby, meant everything was first time for the mother too. As she gathered the stuff she had her second alarm. It was the 7th month. "It's unsafe, you should either complete the 7th month or you should have had the baby in 6th month", said the matron."As if I ordered the baby to do this", the mother muttered. Three days in hospital pacified the baby not to come out soon.

Neither the mother, nor the doctor could understand these false alarms.
"Be prepared , your baby might attack at the wrong time".

Alas, the parents underestimated the baby. A new house was found , things were ready. The mother had completed her 7th month that day or you could say it was the
1st day of eight month. The baby was punctual and fully aware it was right time to strike.Baby somehow figured out, breaking the placenta meant no more admission and sending mom back. To the mother's horror this was no false alarm.It was really happening and when she was at home of all the places, and all alone.

"The baby will be premature and need extra care but I think it will survive , we need to ask why was this hurry", joked the doctor.

And early morning on Sept 24 1983 a 2 kg 100 gm delivery was made shattering the father's dreams who expected the baby a month later on his birthday." She seems to be a planner of her kind", the father told his best friend.

Need a name , the nurse said. Something which has both our alphabets the father said and named her "Teena". When she could pronounce she ditched the "T" and called herself "Inna". "She is a planner of her kind", the father repeated.

The mother still laments on her first pregnancy when the next two were a piece of cake for her. This baby has made her cry from the womb and has been pesky and naughty till date.

I struggled my way out into the world but I was eager even then.I keep telling you I am in love with the world ( not in the materialistic sense).
I intend to survive and not perish :)

Mom, this one's for you - Thanks to your verbatim details . Had to post something from Home before I finish vacation :) 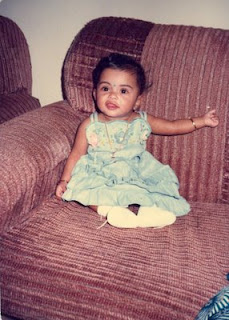 This is an incredible ‘story’ of a girl who seems to be determined to do something, be something from the word go…

that was so sweet teens..

Renny,I am not sure what bolt meant in this context.... was it bold or is it sme term in engg?


I dnt rescript destiny Deeps if I cud I wud rescript many things.

Anita is sweet the only adjective u knw , u never criticise anything I write