The Bread Of Life


And the Lord said, ‘I am the bread of life’. He could have said – ‘I am the rice of life’ or ‘I am the pasta of life’ but he chose the humble bread. But I think the modest bread also has a mysterious side to it because I have heard people say, “I made biryani today” or “I made payasam at home” or even made a Pizza, but I have never heard anybody say “I made bread today”. On the contrary there wouldn’t be anybody who has never tasted bread in his or her life. So how is that bread is something that everybody has eaten but have never made it at home. Even at my home, we have not made bread, though we have made a lot of things with bread.  But that is going to change in our household pretty soon.


My encounters with bread go a long back in time. This was before the age of cycles and motorcycles and as a kid I used to walk more than a kilometer to reach the grocery store. During that time there were only two other things that made me do a long haul on the road - to buy milk or to buy Don’s cigarettes. Sometimes I used to get lucky when all these three things were to be fetched at the same time. At the grocery store, breads would have their own space, on a small table, just at the entrance of the shop, with one stack on top of the other like a pyramid. The local name for them was – ‘Double-Roti’. The name was a misnomer as the bread was not round in shape, as a Roti nor was it just double the size.  There never used to be more than two brands, three flavours and three sizes. I still remember the red and blue checkered wrapper of Modern breads. The three flavours used to be plain, sweet and tutti-frutti. And as far as size goes there was a small, the normal and a big long packet. I have not seen the big long packet from a long time now. Maybe it lost ground when the joint families started disintegrating into single units. At home, mom would usually make french toast, a no fuss and easy breakfast for a working mom. But I disliked the sweet and soggy taste of what the bread was turned into.
Outside the house, the encounter with bread was with omelet and Aji. We both would go to Basanth Bhai's omelete shop, adjucent to the Habibganj Railway crossing. It would usually be a crowded place in the evenings but on days with less footfalls Basanth Bhai would conjure up a delight for us. He would first do a side of the big omelet, then place in four bread pieces flat and turn it around for another two minutes and then fold it all up on a plate. It was bliss to have it with the green chutney, on a winter evening, with life passing by. We would discuss the ways of the world and the happenings of the unworldy, with Basanth Bhai kept busy in the background, such that in those days we would usually wound up sans dinner.


In Kerala, where we used to go during our summer vacation, the bread was called ‘Paccha-Roti’. Again an improbable name in terms of not being ‘uncooked’, as ‘Paccha’ meant it to be. Unlike its cousins in the north, the Kerala bread was a single undivided unit of bread and not sliced into pieces. We were very fascinated with this difference in appearance, same as a person looking at a complete fish, who would have had only seen fishes in cut pieces till now. Also unlike Bhopal, where I used to usually bring home the bread, in Kerala it used to mysteriously appear in the pathayam (a box in which rice harvest is kept). We would never know about it until there was an offer from the higher powers to have bread. We would be very happy to step into the pathayapura, which was dark and cluttered place where the pathayam was kept. Inside the pathayam the bread would be kept wrapped in a newspaper, along with bananas kept for ripening. I think the most exciting part of this bread was that it could be sliced and torn into any shape we wanted. We often used to sneak into the pathayapura to try our luck, to see if there was a ‘Paccha-Roti’ inside the pathayam.

Another event that I remember clearly was during the curfew that was imposed as an aftermath of the riots of 1992 in Bhopal. Because of the curfew all shops and establishments got closed and therefore we had to depend upon a guy to get us our groceries. This guy used to come on a Bajaj M80, with an iron box saddled on the back, instead of a pillion. Because it was curfew time and with all our outside activities stalled, this was the only guy who used to break the monotony of the day. So the moment the guy used to honk at the gate everyone would jump to get outside. You would then see the whole neighbourhood crowding around him. People would claw inside his box and claim whatever they could get. Inside his iron box there used to be variety of breads, more than those at the grocery store. It was in his box that I first saw a bun. Mom was not too happy as it was a small thing, which would not satiate the whole family and then we would have to buy a lot many of them. Because of all the riot issues around we used to stock up things from him, because we never knew when he would next show up. I am not sure what we did with the bun but was definitely happy when I held it for the first time. But once the curfew was lifted and life came back to normal, my routine went back to the grocery store, though I would often see the guy riding his bike with the iron box and remember the curfew days.


Now in Bangalore, a place which I would say has the largest number of mallu bakeries, maybe second only to the homeland, but definitely more than the average number of pan shops in the north. Mallus have kind of monopolized the bakery business, if not at owning a corner bakery shop. It’s in a bakery like this, the one on the starting of 5th Cross, the road opposite to Canara Bank, at 100 feet road Koramangala, to be precise, that I saw the divide of the south and the north collapse, the day when I first saw the - the bread slicer. It was a metallic contraption, which was at almost waist to chest height and looked more like a part of the printing press. The guy would put a ‘Paccha-Roti’ at one end and it would come out as a ‘Double-Roti’. I stood there for a whole half hour, eating three to four egg puffs and having as many teas, just to see how the whole process worked. And in the end I bought  a ‘Paccha-Roti’, for old times’ sake.  Unfortunately I have not seen this device after that day,  though I frequent many bakeries even today, eating egg-puffs.


Quiet recently, I moved from being a bread eater to a bread creator. The opportunity came via Bhujji, who forwarded a mail regarding a bread course offered at Lavonne Academy, Indiranagar. (www.lavonne.in). The course was on a weekend, from 10am to 4pm, costing Rs. 1700. I think the course is a little costly but Bhujji says because they are letting you make your own dough, bake it and eat it too, it’s reasonable. We were taught by Chef Vinesh, a jovial and pleasant guy and surprise surprise, is also a mallu. We were taught to make four kinds of breads - Soft Rolls, Grissini, Foccacia and 7 grain bread. We were five people who attended the course that day, and surprise again, four of them were mallus. 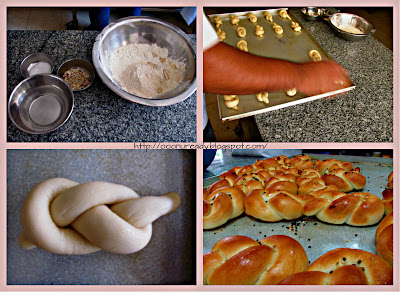 We were each given our own working tables and ingredients for each kind of bread. Under the watchful eyes of Chef Vinesh, we mixed, we rolled, we kneaded, we rolled a little more and we kneaded further more. In the first half we got our hands dirty and by the second half we were on a roll. 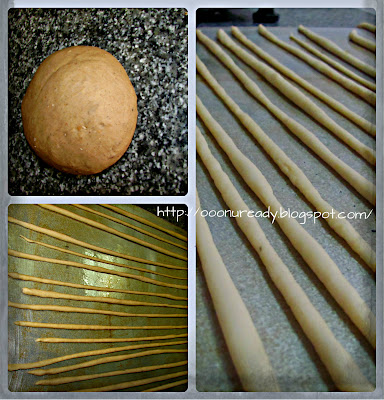 We waited patiently for the doughs to rise and then impatiently to get them baked. Chef Vinesh would often give tips and tricks in between and we tried to remember most and others we noted in between the kneadings. The first to come out of the oven was the Soft Rolls and they were a delight to watch. I am sure the pics would not hold me as a liar. 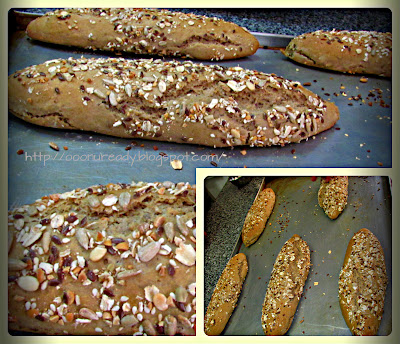 We ate our own Soft Rolls as antipasta with garlic butter and it was awesome. 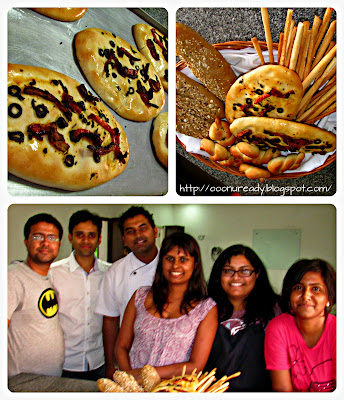 In the end it was a bread-filled day as we had SUBWAY for lunch and then packed the Soft Rolls, Foccacia, 7 grain Bread and a whole lot of Grissini as we said our good-byes. On a whole it was a nice experience to learn how to bake bread and add it to my bread stories. Hopefully I would be able to add a few things I learned here too as a blog post. Next time when we plan to go to Lavonne Academy, it’s going to be the Mr. and Mrs. together.

And I also hope that the Lord would agree that those who bake bread together should be happier than those who just break bread together. So for happier days ahead, bread be with us. Amen!
Posted by Who at 9:09 AM