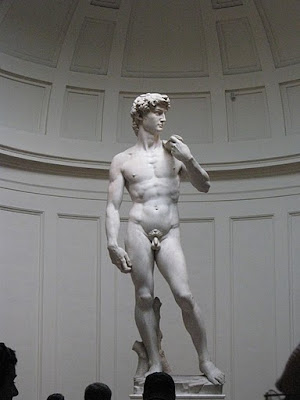 Italy taught me to appreciate three things - sculptures, fountains and gealato and in the same order. I was in love with sculptures at every piazza from Padova to Rome throughout my stay. I would love to write about them in these series but I wanted to start with Michaelangelo's David - my favourite. This post evolved out of a recent experience. We bought and LCD TV and some guys came home for installation. While installing the TV they were looking at the artefacts displayed on the shelf above and I saw a guy freeze seeing the miniature statue of David. Obviously he thought one of us was a maverick or exhibitionist.

'Who' and I have had big arguments over displaying David at home. He seemed disappointed that I insisted to display it ( I tell him he is jealous of David) and he had no option but agree. He gets irritated when I start expressing my love for this perfect piece of art and says its just a mannequin chipped out of a piece of marble.

What many people might not know is that David is actually King David from the old testament of bible. And this sculpture depicts his preparation for a fight when he was a boy with the giant Goliath whom noone could defeat. Bible describes David to have defeated Goliath with his sling shot hence on his left shoulder you see the sling. Michaleangelo sculpted this figure between 1501-1504. The statue was installed at Palazzo Vecchio next to Donatello's statue of Judith another heroic character from the old testament. Michaleangello was just 26 years when he sculpted this master piece.

When I visited Galleria Dell Academia at Florence I was turned off by the long queue for this small gallery which was famous for this statue alone. My friends were uninterested is standing in such a long queue and said they would rather prefer seeing the replica of David at Palazzo Veccchio. The original one which was installed in 1500's was transferred to this gallery and a replica was made for public. Hence photography of the original is prohibited though I managed to have pics of both. 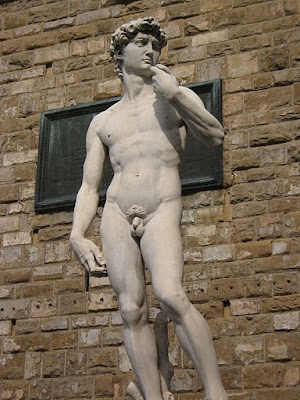 What fascinates me and many others would agree is the collosal size of the sculpture. David's face has a tense look , his eyes stern and confident. Some argue this pose is after the combat and a pose of victory while some others argue its his pose before the fight and hence the tense look.
When I first learned about David and Goliath as a kid from my mom who often read to us from the picture bible I had a picture of a young boy who was slim and weak. But the muscular structure of David chiseled by Michaleangelo depicts an adolescent.

Though nude a fact which many would argue is vulgar I find David a very appealing sculpture. His eyes attract me more than elsewhere. Nude statues are very common all over the world from Khajuraho to Renaissance works in Europe. But David does not strike me vulgar.

Its a depiction of elation, of pride and victory and to watch him is an experience. Maybe I am crazy and so would you be if you were there with me.

P.S - This is our 200th post and we would love to thank all our readers for their suggestions and support.