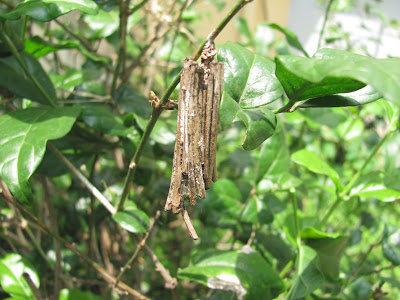 I have been trying to write this post for so long that if I would have waited any longer I would have become as old as I was young when I first saw this thing. To say the least, it’s a cocoon. And I was really surprised at the detailing that went into creating this little thing. It was usually found clinging to shrubs, made of dried stems of the same shrub, I guess, and glued together with a high tensile gossamer like substance. I used to like the dexterity with which the thing was made: neat piles of dried small stems, of equal length, held together in a cylindrical fashion, with space for life inside. The cocoon was not stationary but kept moving from branch to branch. I used to wonder if this thing was made on the ground, using the dried branches fallen on the ground, and then carried upwards or was it made on the shrub itself, but then it would be difficult to pluck dried branches and glue them in mid air. Whatever be the method, the execution was perfect.

More often in the struggle to prize this thing open I used to squash the insect or caterpillar inside. Many of these were sacrificed at the altar of my curiosity though I was never able to see the whole life cycle of the insect: how it got there, how it made this cocoon and who flew out of it eventually. 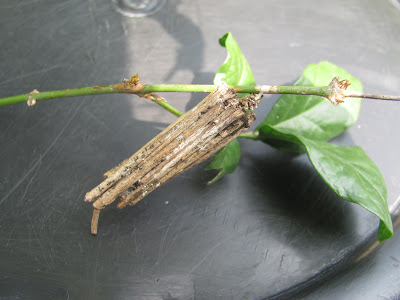 So when I found it again at Moni’s convent recently I was filled with joy, similar to finding a childhood toy in the attic. I went through the whole exercise of opening it but found nothing inside. So this lucky one took wings before it could meet me or its end. I took a few pics to share it here. So if any of you have any idea of what this thing is then please let me know.