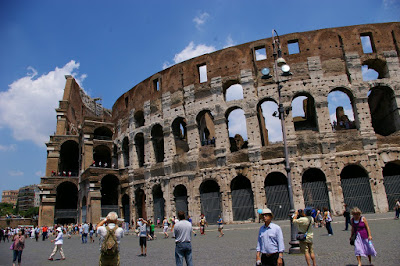 I, a Roman Catholic, brought up with strong religious values, was taking in the sight and smell of the Vatican and St Petersburg. But maybe the fatigue, after a tiring journey, and the endless musuems to Sistine chapel or the non-Christian friends, too critical about Christianity and its history, failed to make an impression I had preconceived about this place. It even made me guilty at some point for not feeling as excited as my family and hubby were. Would they say I lost faith in Europe? So I was silent about my experiences, limiting it to one word ‘wonderful’, every time I was asked how I felt in the Holy City. Mom always dreamt of travelling to Rome but I never did. Nor have I dreamt of any European trip for that matter. But walking the road to pilgrim I wished I had my mother’s faith or atleast if I could swap my day with her and let her experience this dream of hers . My hubby thought I was lucky to be there but something within made me tired.

But to my surprise what people experience in Vatican, a spiritual and aesthetic experience, I had at a different place.

“Don’t miss the Colosseum. It’s a must see before you die”. I took the comment lightly as I set for my journey to Rome. I was reading Jhumpa Lahiri’s ‘interpretation of Maladies’ where in one story the same lines were echoed. Was it a sign of what experiences lay ahead, I didn’t know? When I stood in the long queue, for 45 mins, to enter the Colosseum, I imagined how people would have travelled from long distances on foot to see the shows at colosseum in olden days. The huge structure with its magnificnent pillars was exciting and intimidating. “How many have shed their blood in this place”, Basu said, making me scared what if their souls wandered about this place.

What strikes you first is the perfection of the structure, though 75 % of it is reconstructed. It really frightened me to look down and imagine a gladaitor shedding blood with people around cheering and howling. As the tourists looked down and took snaps I could visualise the excited crowds in ancient days screaming for gladiators to kill. Why are we all so eager to see this monument where thousands were killed? Was it an interest in history or architecture I don’t know? But as some lay relaxed on ruins of pillars I could not stop hearing the victorious screams, growling animals and crying women in the arena.

The musuem inside the colosseum displayed the artifacts used by spectators during these murders for their entertainment. Needles (can’t imagine women wove during this gruesome display of bravery as if they were watching daily soaps). Hairpins fallen from women who came to watch the game (concerned about combing when someone was shedding blood). Clay pots and oven brought to cook food in between the game (people ate while watching this). Coloseum was part of life of Romans who could eat watching man being torn apart by a gladiator or a tiger. I found it amusing yet beleivable because I had friends watching action movies, worse than deaths in Coloseum, while having lunch.
Having not seen’ Gladiator’ the movie this place had no gladiator effect on me so I was open to all that I saw .To understand the pains of a man who had to fight till death for a freedom he would never get that felt like the myth of Sisyphus. It is even fascinating to know these fights were celebrations that ran upto 120 days killing nearly 12000 animals and there were crowds excited and thrilled to watch this. Well people still are watching wrestling matches but there were no match fixing in Roman days or so I beleive.

But as I leave the colosseum I can’t help wondering what a barbarious animal man is yet claiming to be above all the other species. Would any other animal fight or enjoy killing for fun? I don’t know and yet today when people tell me Colloseum is a must see before death,I think nothing has changed in the centuries gone by. I don’t know for what reasons but despite all the blood shed and cruelty my soul never felt awakened anywhere else.
Something about pain fascinates me.
Posted by The quirk at 10:32 PM