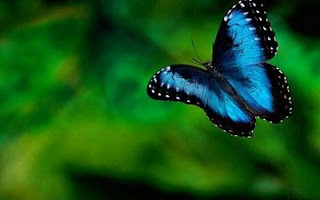 He was full of irrational beliefs, the most superstitious person I had ever met. He believed if butterflies crossed your path your day would be great. And there was this child like smile on his face when he saw a butterfly and his eyebrows would arch in a questioning gesture telling me see butterflies!!
He believed if you shaved your day was gonna be hell. He was scared like hell of number 13, he avoided talking to people with roll number 13, he avoided fixing up meetings on 13, he hated being 13th in a line and in fact his hobby was finding out what happened to people given number 13 as roll number. I once tried rationalising with him asking what about people born on the date 13th? Or what happens on 13th birthday. But as you know irrationals cannot be reasoned with so I always gave up.

If he ever lost anything he would draw up his irrational theories, he was a walking, talking Harry Potter who lived in a world of magic and was contented with the bare minimum. The number of good luck charms he carries would amaze you, he has no track of the number of shirts he has, but good luck charms yes.
You talk about war, epidemics, anything sensitive you can see him blinking at you and saying , oh you are so serious and intelligent , which makes me feign a smile and wonder “ which planet is he from ?”. I suspect he never reads a news paper; well he was not very social either. Irrationality made him a dreamer and dispassionate about things that boiled me up, so when butterflies excited him , a book review caught mine.
It’s amazing how friends come in an assorted box called life. Each time I waited for a friend who matched my interest, and in the long run I realised “hey I got a bunch of eccentric weirdo”. I would yell years ago if I saw a person excitedly counting train boggies or stopping at signal to stare at an aeroplane or stop my work to talk about how many laps he ran. But that’s how he was. You accept it, his alimentary canal doesn’t function because what he hogs do not seem to show anywhere in his body or was it his digestive system that didn’t work?

But he is so different from “FOI” at least. Well who’s FOI? Wait for the next blog, I am opening up my assorted box, don’t tell me I got a bunch or wierdos for F.R.I.EN.D.S I love them anyways 

I can’t reveal their names so for now this is Mr Butterfly Effect!
Posted by The quirk at 2:15 AM