If there is heaven on earth it’s where you can taste butter, butter and more butter. And Pondicherry comes close to be that place, but strictly for a glutton. More than sightseeing we got caught up in tasting some good pizzas, pastas, coq au vin and beef bourginion. We researched a bit before this trip and were aware of the places we would visit and where we could get some good grub. This trip was very special to us; being our first road trip alone. WHO was all excited using his navigator app on Ipad. And he gave me his co-pilot seat to track the routes. With a couple of misses and wrong turns we reached Pondi in 4.5 hrs from Chennai and that too after attending a colleague’s wedding for which we had driven nonstop from Bangalore the previous night. 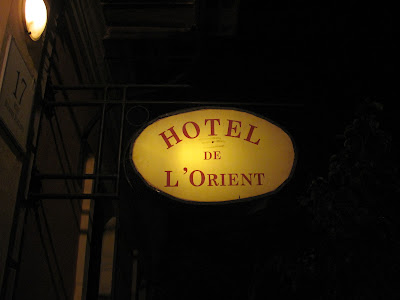 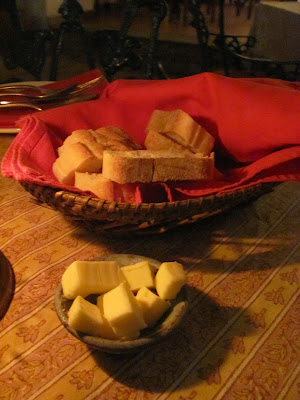 We were famished and directionless on our first evening in Pondicherry. After wandering around to
decipher the many Rue’s (roads in French) in Pondi, with promising restaurants at every corner, referred by other bloggers, we ended up dining at ‘Café d le Oriente’. I found their stuff over priced for the quantity they served. I wanted to taste a quiche, because I never had an authentic one, though have had experimented with quiches back home. The quiche served was a small slice and a rip off at Rs. 185 apiece. And the chicken soup had an overwhelming cilantro taste. I suggested Spaghetti Carbonara and was again appalled at the quantity served. I think the serving size had a foreigner stereotype to it. The spaghetti tasted quite different from what I had tasted in Italy. In short, nothing managed to surprise our palates. This was a restaurant not recommended on the websites we had google’d and so we decided to do penance by only following the recommended ones on our list going forward. 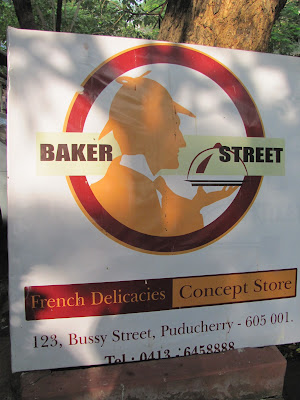 On the way back to our hotel, I had a sudden craving for dessert. We were discussing about our breakfast next day during our dinner at ‘Café d le Oriente’ and the spread at ‘Baker’s Street’, so when we found ourselves right in front of their doorstep I thought the universe was conspiring to let me taste a slice of heaven. I remember how mesmerized I was when I entered ‘Baker’s Street’. WHO says my face had a glow he had never seen before. I was excited seeing tarts, tiramisu, éclairs and petit fours. Since it was closing time I could see that most of the trays were empty. I had an éclair and it tasted divine. We again landed there the next day, after a walk at the beach, for a hearty breakfast. We amassed a bill for Rs 700, which is definitely costly, but then we tasted everything we fancied – a spinach quiche, a mushroom- hamomelet, plain omelet, orange juice, pineapple juice, bacon sandwich, butter croissant and we liked everything. 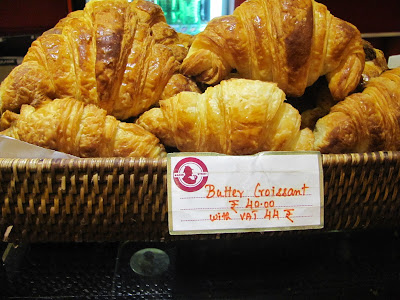 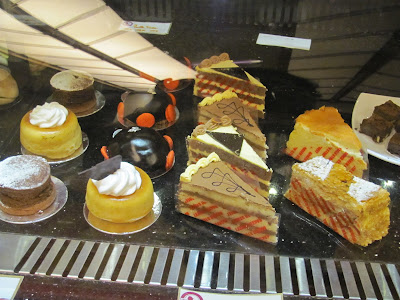 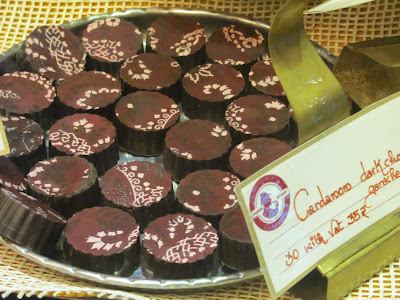 And it was like having a gastronomic orgasm. We choose this breakfast over the one at ‘Promenade’, who were offering a buffet for Rs 400 per person and we were pleased at what we saw there too. If you have a bottomless tummy I would suggest the ‘Promenade’ but if you are like us (poor eaters at buffets) ‘Baker’s Street’ might suit you. Now if you think Rs. 700 is still expensive you definitely need to taste the croissant and I bet my you salt that it is made with a lot of honesty. When we tasted a croissant at ‘Hot Breads’ the last day I realized the difference.

We visited ‘Baker’s Street’ again the next day to pack some breakfast for a trip to Pichavaram (second largest mangrove in the world). Pondicherry attracts people for three reasons- beach, booze and shopping. But mapping the city and familiarizing would not take more than a day or two. So if you have more than a weekend at hand, Pichavaram is one place you should not miss. I have lived all my life in cities with proximity to the sea and beach so these were definitely not my reason for a trip to Pondicherry. What excited me was the French food safari. So I would add a fourth reason why people should choose Pondicherry for a holiday, it’s to satiate one’s foodie soul. 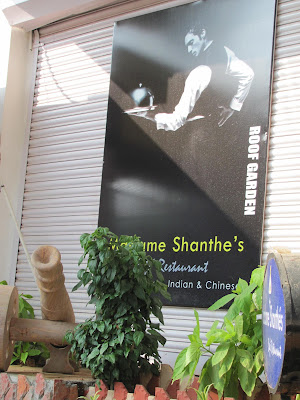 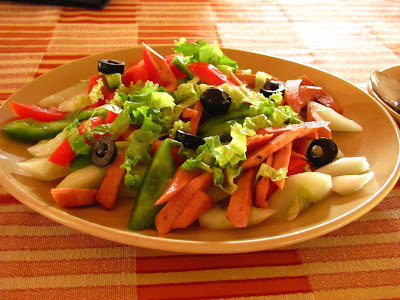 Our travels from Pichavarm were filled with hope of savouring the local eateries ut we were disappointed at not finding any worthwhile joints to refill ourselves. And that’s how we ended up at ‘Madame Shante’s’ at 3pm. Now that indeed was an odd time to have lunch, but after a two hour boat ride at Pichavaram and a great bargain on some dry shrimps on our way back, ‘Madame Shante’s’ was the only place willing to offer us a decent meal at 3pm. We had a sausage salad, beef in red wine sauce and Pasta Arabiata for Rs 350. And I must add that this was one reasonable meal we had in Pondicherry. I was more than happy to have Pasta Arabiata well prepared, after a long time. 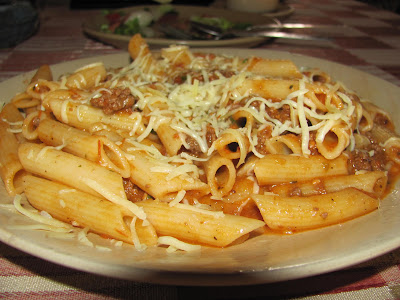 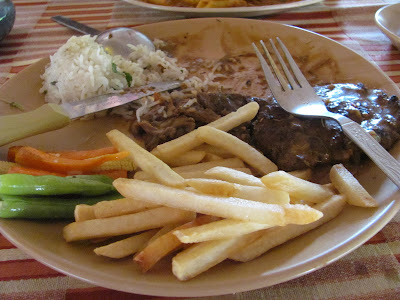 A year ago my friends from insti and I had visited Pondicherry and the first meal I had tasted then was at ‘Satsang’. With all the good experiences of that meal, especially the beef bourginion, which I first saw in the movie Julie and Julia, WHO and I decided that we would have our dinner there. But the food did not match our expectations. WHO ordered beef bourginion and I kept wondering why it looked so different from the one I ordered a year ago, only to realize they served us Beef Burgundy instead of Beef Bourginion. I ordered a Coq au vin which turned out to be grilled chicken with French fries. What upset me the most was their slow service. There was no warmth and promptness to serve on the part of the waiters while compared to the other eateries we went to. We chose the rooftop and perhaps the staff at ‘Satsang’ was finding it difficult to manage two floors. I would recommend their Beef Bourginion and my suggestion is solely based on my memories of Beef Bourginion a year earlier. By then we had quite a few experiences to have a bench mark in our minds as to what was worth and what was not. 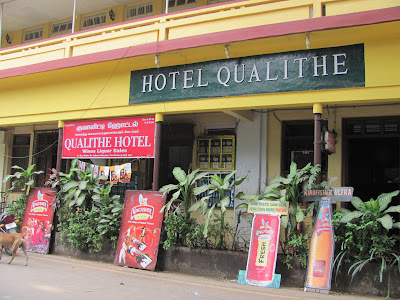 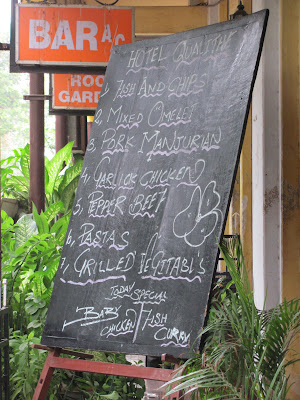 Another eatery that surprised me, my taste buds to be specific, was ‘Hotel Qualithe’ located at Rue De, Labourdannain. We missed them the day before, after our visit at Auroville, as we were later for lunch time. But the next day we were on time and found quite an impressive menu on their chalk board. And since we love pork we ordered Schezwan pork which was the spiciest I have ever had. 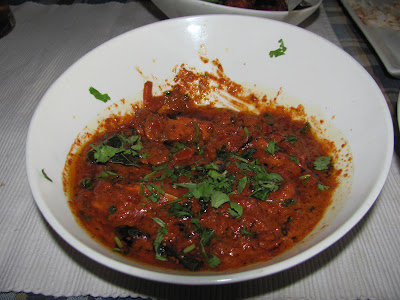 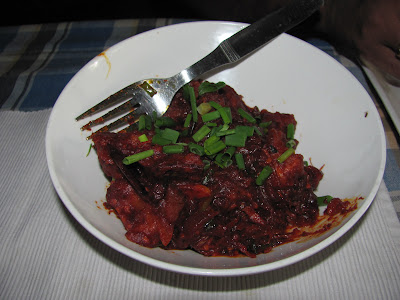 We also tried out a fish curry which was nice as well. I am usually skeptical of fish curries, prepared other than at home, or you could say I am an ethno centrist when it comes to fish. I want it prepared my style. But I broke this prejudice of mine at ‘Hotel Qualithe’ and though I was not completely happy we did manage to finish the fish curry served to us. 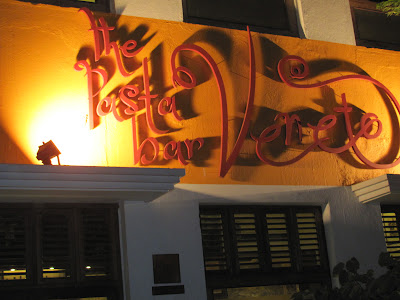 If you ever Google eateries in Pondicherry, wood fire pizzas are something that always come up. And having been to Italy I immediately switch off to the luscious imagery of prosciutto filled pizza coming out of the stone oven with a long peel (Peel is the shovel used to shove pizzas and bread loaves into the oven). We could not make it to most places that promised these pizzas in Pondi. So on our last night in Pondi, we went to ‘Pasta bar Veneto’. It is not as expensive as it sounds and plus it has the American booth style seating. A small bar with some bar stools makes it look even more chic. 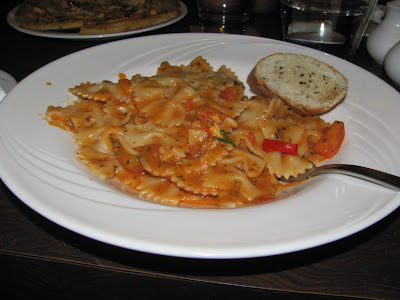 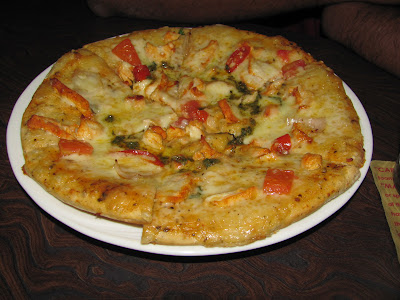 We ordered a Neapolitan pizza and Pasta Bolognese for Rs 540. Even though the place is small we loved the ambience. If you are a diehard fan of Pastas and Pizzas this is one place you should visit. There is also a chocolate shop right across ‘Pasta bar Veneto’ which would amuse chocolate lovers, even more reason to go for your antipasti and Il Primo at ‘Pasta bar Veneto’ and then your Dolce from next door.


I hope the pics excite your taste buds and these suggestions can help those who wish to visit Pondicherry and learn the place through their palate.