If you heading south of Chennai, on East Coast Road, and if you are not stopping at Mahaballipuram, then you are definitely bound for the land of ‘Brew’ and ‘Bread’ – Pondicherry or Puducherry, as its now called. A third reason could be the ‘Beach’ but I did not find it to be that alluring because it was more rock than sand. I am sure that there are hidden beaches in and around Pondicherry, which are pristine and un-crowded. But other than the three ‘B’s, what really caught our attention was the presence of a mangrove forest nearby and the second largest mangrove forest in the world at that. The place is called Pichavaram and is situated 60 km south of Pondicherry on the Bay of Bengal coast. For the uninitiated, a mangrove is a swamp like formation on the coastline consisting of plants and vegetations which are tolerant to saline water conditions. Mangroves shelter fish, birds, crustaceans and other marine life. Mangroves are also important because they form a buffer that defends coastlines from flooding, erosions and tsunamis. India has both the largest – Sundarbans and the second largest (Pichavaram) Mangrove forests in the world.

According to us the best time to visit, any place in and around Chennai, is between November and February. All other months are really hot and humid. And though Pichavaram is a so called forest, it’s on a beach and without much shade or cover from an unforgiving sun. The ideal time in the day to visit Pichavaram would be 9 am, when the place opens for tourists, and wrap it up before 12 noon. Make sure you carry caps, shades and water bottles. We started from Pondy around 7:15 am and reached Pichavaram by 9 am. Ideally one should start a little earlier, say 6:30 am, and then one can do a few stops on route. The drive is scenic in patches and traffic less early in the morning. 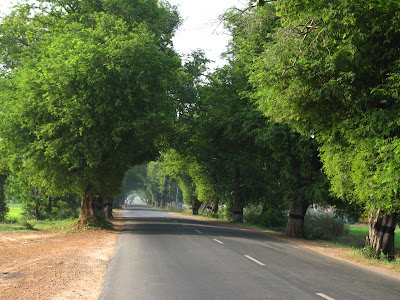 The ECR is good to drive, other than the road within the Cuddalore town limits. It’s a horrible patch and if you are driving your own car you definitely need to give it a good pampering after the trip is over.
Food is a challenge as there are no good restaurants on the way. We packed our breakfast from Pondy and had it on-route and had planned to come back to Pondy for lunch. But if one is able to pack a light lunch as well then you could spend more time in Pichavaram. There is a restaurant of the tourism dept at Pichavaram but we did not visit it and hence cannot give a review per se. 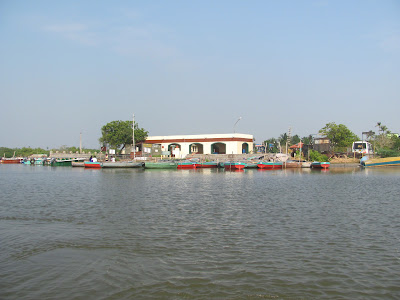 The ticket booking office is a non-discreet building, with the ticket counter like any old single screen movie theatre. There is ample parking space if one is travelling by car or taxi. To venture into the sea one has two options – row boat or motor boat. The row boat is a better option as compared to the motor boat as a row boat can easily negotiate the insides of the mangrove forest and there is no danger of the blades getting tangled in the undergrowth. We were two people on a single row boat but our oarsman, Mr Sarvanan, told that the row boat can take up to 10 people and more the people it’s better for him to balance the boat and navigate. The row boats can be hired on an hourly basis with the minimum charge being approx Rs. 200 for two hours. Then there are four and six hourly charges.
Sarvanan, our oarsman, started rowing the boat and showed us the route we would be taking in the next two hours and it seemed like we were in for a boat ride in a lake. We didn’t drive this long, early in the morning, for just a boat ride. Bhujji started conversing with Sarvanan in his native tongue and told him that we wanted to go deep into the forest and see the place where a scene for the movie – Dasavatharam was shot. Sarvanan got all excited and started talking about places deep within the forest where there is very little sunlight, places where the branches tangle around you like snakes, place where there is a beach within all this and more. He said he could cover all this within the two hours that we had, at a price of Rs. 400 more. And this is what people usually do, buy a normal ticket and then negotiate with the oarsman for a better ride. 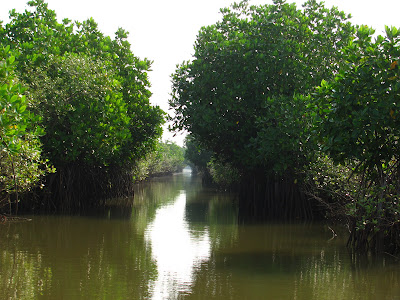 After the deal was set, Sarvanan changed course and started rowing with a purpose. Within no time we were in a new world, it was surreal and exciting at the same time. We had so far been to places where the plantations or woodlands were really tall, like trees, or were shrubs, like in gardens.  Or like a sugar cane plantation were the plants would be just a foot or two above you and have really dense growth on the ground level, where little light would penetrate. This was something like the later. 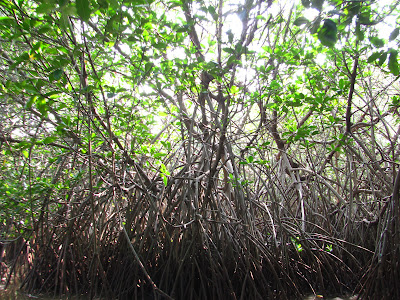 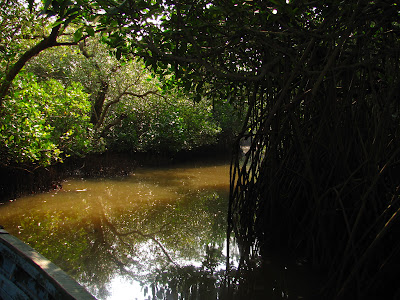 But what made it much more bizarre was that we were rowing through it and there was three to four feet of water beneath us. The water was murky and had no visibility. Had the water been clear it would have added to the surrealism. For now we just had to concentrate on the world above the waters. Bhujji was right in mentioning that it looked just out a scene from the movie - Anaconda. 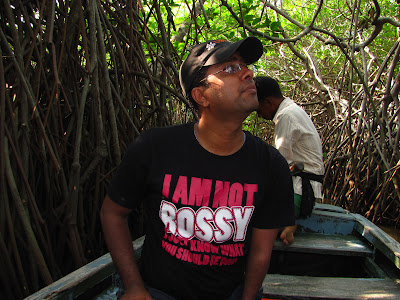 Often at places we had to bend our heads, when we were passing through the undergrowth, to save ourselves from getting hit by a root, or was it a stem? We followed a small stream for some time, with vegetation all around and over us, and then it would open up into a small clearing of sorts, where the water was deeper, and the foliage was a little spread across. 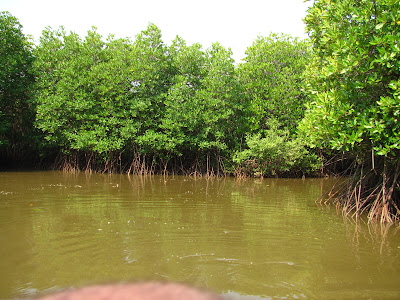 Then Sarvanan would choose another maze and row us inside of it. Baffled we asked him if he knew the route and he told us that there are over hundreds of such labyrinths in the whole stretch of the mangrove and it took him more than two months to memorize all of them. 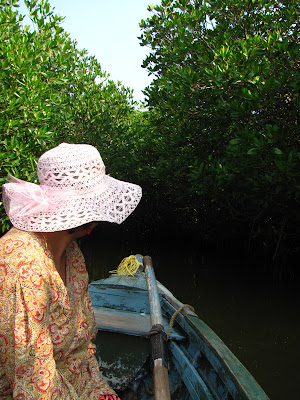 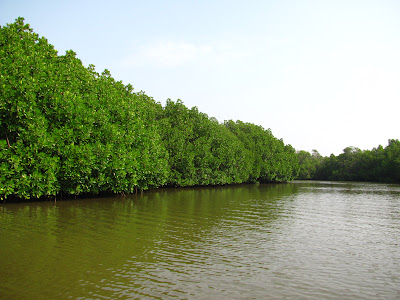 Often in between we saw other boats and fishermen going about their daily chores. 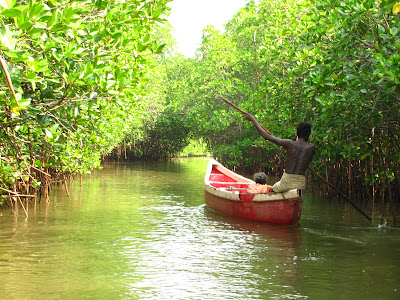 We were hoping to see a lot of birds, as it was early in the day and it was also the migratory season in south India, but got a little disappointed at that front. We only captured a lone Kingfisher. 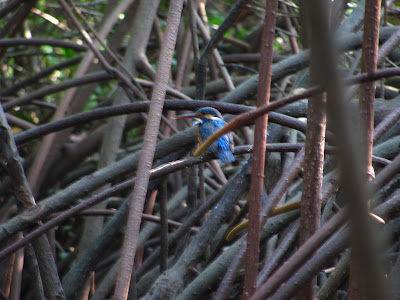 Sarvanan mentioned that there are options to catch mud crabs and go fishing within the mangroves. I am sure there might be arrangements made, similar to the ones seen in National Geographic, to catch and cook, for if we are ready to spend the right moolah. Again if negotiated properly, one can carry a little brew and proper lunch and have a hearty meal on the boat with family and friends, within the mangroves. But I don’t want to give ideas here to the Indian tourist lot, who are unruly in general and disorderly at best.  But for those who appreciate nature and the wonders around, plan this trip well and experience something which is not your usual boating in the lake or a visit to the beach, for sure.
So for next time, we are thinking to get Bhai along for little fishing, which he completely loves to do, and crab fishing as well. Maybe an extended trip into the still unknown and definitely the beach within the mangroves. Then there is Mahabalipuram too, which was looked over in this trip, to be visited.

Until then, there is Bhujji getting ready with a post on all the gastronomic outing we had in Pondy. Not sure if I can wish you Bon Apetite!

Chechi, Thank you for the post. This place looks really beautiful. I would definitely go here once instead of going to Sundarbans, as it's more likely that I'll be eaten by the worlds most beautiful KILLER 'The Royal Bengal Tiger!!!'