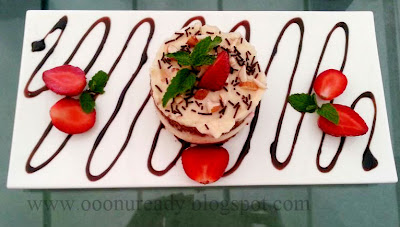 WHO was all excited when he came home clutching an email print out that had declared a Master chef- chocolate special at their office. The instructions for the competition required each team with 3 members to come up with an innovative dish using lots of chocolate and strawberries/ any berries, nuts , kiwi or cinnamon.
WHO  told me I was part of his team because he had already committed to participate and his bosses had high hopes set on him.I invited this trouble by sending away to his office cakes and cookies for potluck and so when the team members had to be selected people unanimously yelled at how WHO deserves to lead the team because his wife ( that's me) is good at desserts. Frankly I don't believe the junta was madly in love with my cooking. This was perhaps their way of  enjoying a weekend by dumping the responsibilities onto someone else.

I have never experienced such a packed weekend with WHO all excited. We made three desserts over the  weekend and had my cousin brother over to finish them off. We made a strawberry cheese cake with white chocolate and a baked cheese cake by the way. It started seeping under my spring form tray and was mess when it cooled down. It did not give us the desired wow factor when we tasted a slice. My cousin forced us to try it once again because he found it heavenly. WHO was bent on the ideal dessert onto which he could show off some plating skills. And so I came up with the idea of trying a layered dessert set using ring moulds. We had a tough time getting the mascarpone cheese and white slab of chocolate. We felt our stars were waging wars to prevent us from participating in this event and as our first dessert flopped and then the chocolate mousse came out lumpy we decided we would not go ahead. And that's when I decided to go with ring mould and invent something of our own. And then we came up with this dessert. WHO named it " Chocolate layers with surprise strawberry centre"..The title I taught him was something complicated and so I liked his simple version.

And as we often deduce the climax of stories from the way they unfold you must have already realized that WHO indeed won the competition and he bagged first prize among thirteen teams and I am proud of my darling boy for taking our idea forward and plating it. He says plating and the surprise strawberry centre helped him bag the first prize.But I think it's his dedication too for if not him I would never bother trials of three desserts to try one.

I am not giving away the recipe for now because I am waiting for few more pics taken by some of WHO's colleagues. It so happened that our camera was not functioning for two weeks and was under repair when this whole chocolate season began and I regret not having photographed  my creations giving them the due credits they deserve. But for the first time in our married life we got so engrossed onto a task so enjoyable so kudos to WHO's office for organizing this contest.

The winners and their creation. For those who aren't familiar with WHO he is the guy in the centre. 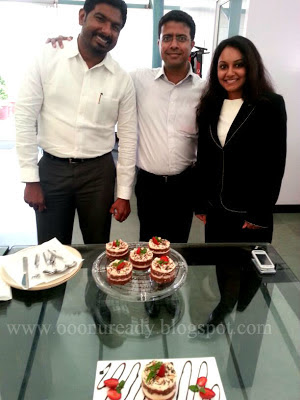 These are some of the creations plated by the other participants I guess the one below is a panacotta. 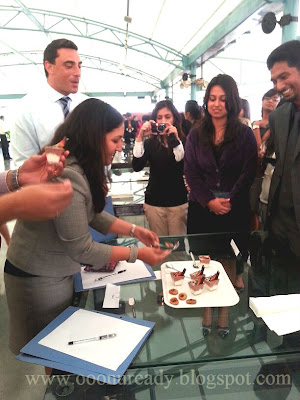 And this is a chocolate bundt cake with some strawberries and kiwi stuffed in the centre. 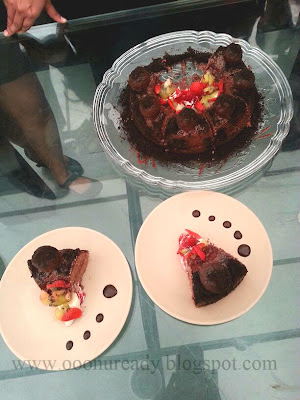 I am sure this bunch of guys had fun posing as judges and eating the cakes too :) 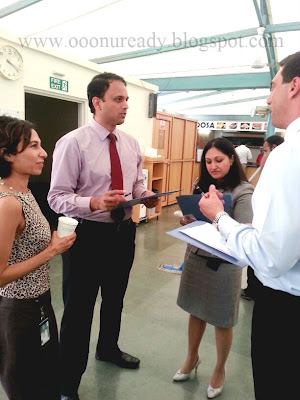 I found the channa chocolate cake as per it's decoration quite interesting. 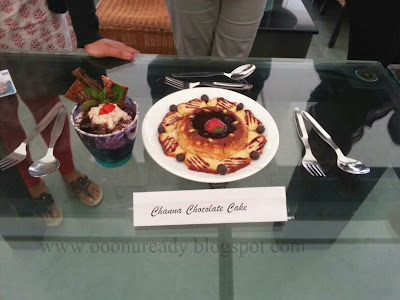 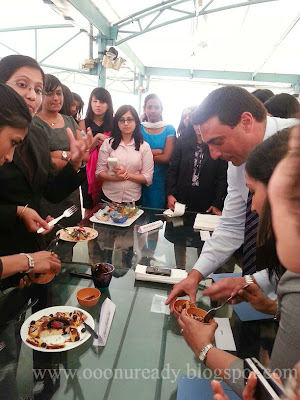 I like chocolate in any form so I can't say one was better than the other but obviously there was no novelty in most of the desserts according to WHO and maybe most desserts had an overwhelming chocolate feeling and the other ingredients was not sufficient to neutralise the chocolatey flavour. 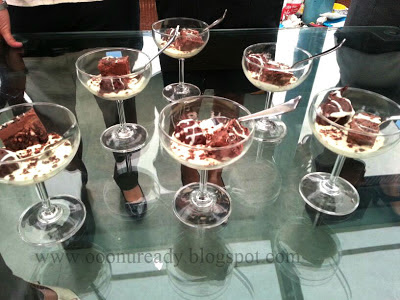 I loved this dessert I could imagine how it would taste and this is something I would call my comfort dessert :) 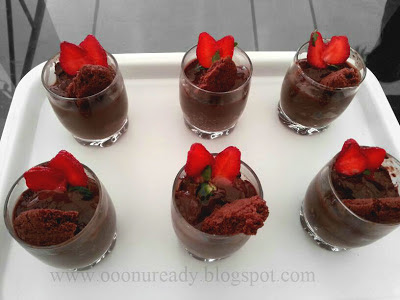 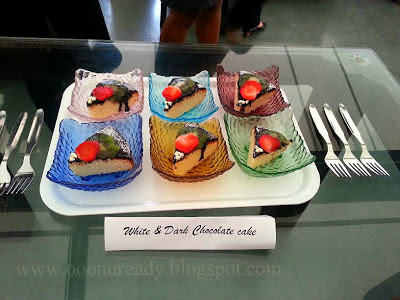 Labels: Food, Musings from the editor