I have very recently realized, that I can rant for hours on my cats apart from food and books my usual topics for discussion.I was brought up in a pet friendly household. If I can remember correctly the list of animals my dad kept runs from pigeons and flying ducks to hamsters, eagles, piranhas and neon frogs. Dad ran a shelter for animals in our two bedroom apartment. My mom was his accomplice alongwith my sister who thought this was a religion. I hated animals in those days. I think it was dad's over dose of doting that made me aversive to animals. I was simply jealous of the cockatoo and amazon parrot whose intelligence dad harped all the time.But nevetheless I had a turtle, few hamsters and a guinea pig which I refused to call pets.Animal love perhaps was ingrained in my blood,though I did not profoundly profess it.

Joining IIT was the phase two in my life. I lost my dad few months before joining IIT. I sometimes feel, he left few qualities of his with me when he left. I soon started appreciating the wildlife of IIT. The deer, the monkey, stray dogs and birds. But what I was never prepared for was the cats in IIT. Our hostel had few of them too. My experiences with cats in the past weren't very rosy. I even hated Tom in Tom and Jerry because my sister told I was Tom and Tom always lost to Jerry. But then I started observing cats in my hostel carefully. And then Sigmu was born. Sigmu was the first kitten I had held in my arms and the little fella grew close to me. He introduced me to the world of cats and continues to amuse me till date. He is as old a resident as me in this place and we both cohabit, room no 142 at Sarayu hostel.

Living with cats 4.5 years in IIT, I think I understand them, even respect them more. I have realized we all have myths regarding cats.We tend to beleive without experiencing  cats a lot of things which actually is not true. Like we say cats are selfish. Sigmu proves me wrong  on this note. There are times he mews at me, comes visits me expecting no food, no pampering and yet we both feel good in each other;s company. Sigmu was named after Sigmund Freud. I swear I have no interest in Freud but when I saw Sigmu- I felt like calling him Sigmu. 4 years down the line, now many call him Zorro because he has a mask like face. But even today when I enter the hostel and scream "SIGMU" after a 10 day vacation- he comes down all excited like he did when he was a kid. 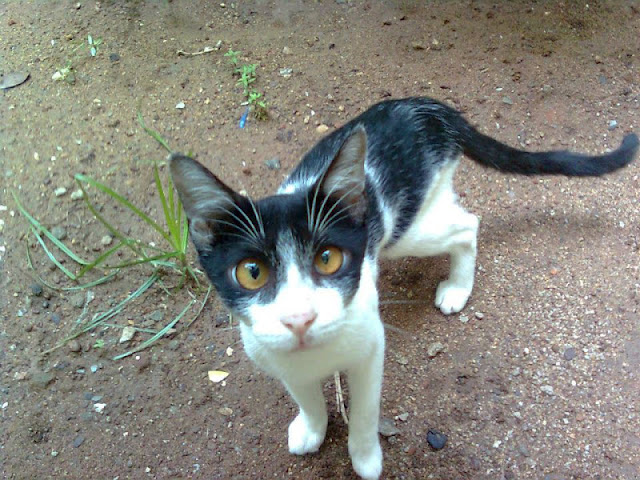 What I love about Sigmu the most is his ability to sense my moods.There are days he loiters around in my room when I am  down. I find him pensive on such days, he watches me and we both sit down on the floor silent. He does not mew, he comes near me at times, licks my cheek when I cry but he never mews. He is also the most spoilt cat around and is a junk food addict.This is something I have noticed in Cats at hostel they have different eating habits. Sigmu loves chips and fried stuff and can hardly stand veg gravies on his chappathis.He loves cream biscuits and my hubby is benevolent in funding for Sigmu's diet and so I always have in store cream biscuits for this fellow. He has the most irritating voice I have seen in cats and many hate him for this matter and shoo him away. He takes his revenge by peeing on their shoes outside their room and calls him a nuisance. Till date this fellow has never  dirtied my room so I firmly believe he understands what revenge is when he pees on the sandals of other girls :) 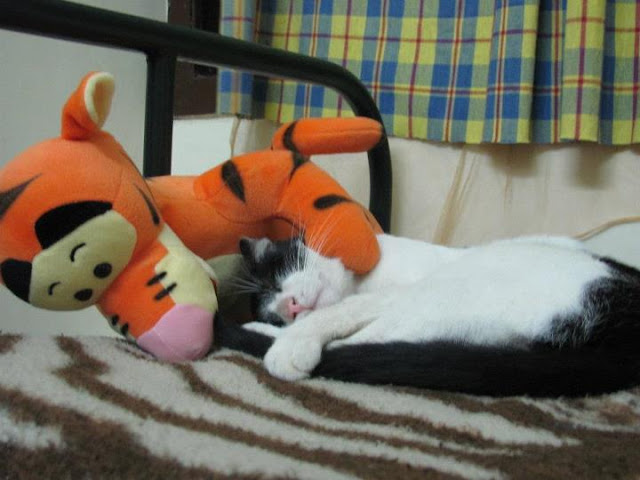 Recently when I got a pet cat at home I realized not all cats are friendly with stuffed toys. My pet Don uses stuffed dolls are his punching bag while Sigmu loves my toys as is evident from the pic above :)
There is so much I could still describe about Sigmu but I guess we can come back again. Sigmu is a father today and I see him take care of his kittens. He watches them from a distance cautions them when they do mischiefs and dotes over them like a loving dad. I don't know if this is common to every cat because I don't see the mother cat do any of this. To many this is just a black and white cat with a horrible voice but there's so much character in this cat and a bonding we both share- he made me love cats as a species and I would always love him. Love you Sigmu.