I was not brought up in a pet friendly family or a better way to put it would be to say ours was a pet agnostic family. My folks were not animal haters though any idea of bringing home a pet would be met with negative responses like, “if the dog bites you then you will get fourteen injections in your stomach” or “the cat would steal the milk and fish in the house”. And with no pet owners in and around our colony there were no positive reinforcements either. So with the breadwinners not opening up to the idea we were always in want of a pet through our childhood years. The closest we ever came to owning a pet was to catch some minnows from a pond or a stream and putting them in Horlicks or Bournvita bottles.

Compare that to Bhujji’s childhood and one would wonder if she was growing up in a zoo. Her father – Pappiachayan, was a true animal lover and kept a wide range of pets. If a sulphur crested cockatoo was not exotic enough, he had a piranha and miniature blue frogs for company and the list was endless. All these happened to be in a two bedroom flat, with wife and kids for equal measure. Pappiachayan would spend hours cleaning, feeding and petting these animals, often getting rebuked by Kochu that he spends more time with the pets than the kids. Bhujji’s favorite was the guinea pig and a daschund called Rachael.

We have had always liked the idea of having a pet after we got married. We did a few trips to pet shops in the city but did only window shopping so far. But because of us not being in the same city was not letting us materialize the idea. Then suddenly one Saturday afternoon we found ourselves in Shivaji Nagar and we just gave into the temptation and brought home a kitten. Or to tell you the truth it was her eyes, her blue eyes which took our heart away. We have named her Candy, with the hope that there would be another pet on the way later and we would name it Sugar and thus we could keep calling out Sugar Candy. 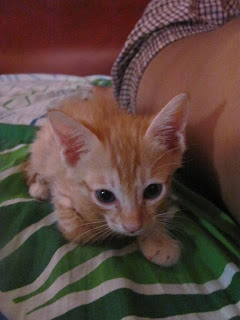 Though I think it’s difficult for us to ascertain whether it’s a queen or tom, as its just maybe a month old, but I am sure it’s a girl because – it doesn’t eat anything and looks size zero, keeps meowing all the time and seeks attention and the best thing she like to be done to her is to keep caressing her all day. Also I have had a few scratches already. I am sure Bhujji might be sharpening her claws reading these lines but again she should be elated that the family has a female majority now.

Though my initially fears about leaving her alone all day still remains, I am hoping that she would device ways to keep herself occupied once she’s older. She doesn’t do much of cat stuff now, like scratching the sofa, running behind insects, sleeping all day but with a little initiation I think the instinct will kick in. I hope she would turn out to be a very well mannered cat and not something my parents feared for. By the way, my folks are visiting us for Easter in the coming weekend. Fingers crossed.
Posted by Who at 9:06 PM

I love my baby and if your folks revolt I will unleash Candy at them :P my baby cutie pie

It is always a negative reaction from parents at first, but they slowly warm upto the animals. I faced same problems at home, till Bittu joined us. Now mom n dad care more about them than me :)