My Illusionist from Florence 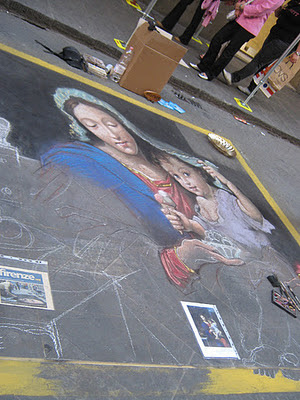 This is a sight from a pavement in Florence. I don't know what this form of art is called.All I saw was the artist filling in dyes into his sketch and it was magic unfolding before my eyes. I was amazed at the precision and his pace. He never stopped and never corrected himself, in fact he made no mistakes. He seemed too busy to explain his procedure. Besides, that was not why he was doing it.But, his dexterity was mesmerizing and drew a large crowd. People paid him generously and I could see that he deserved it. He was earning rather than begging for a living. He was what I would call an artist of the street. To him each day was a painting- an imagery he painted, etching memories in minds of his audience. 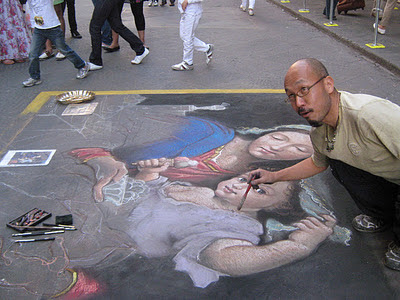 Thankfully, this city respected art and no wonder it does, it is obviously the city of Renaissance. I saw a very appreciative crowd cheering , supporting and waiting for the artist to unfold the picture. And truly it was a feast to the senses to stand there and watch him paint.There are few days your senses need a royal treatment and to me this was one such day that my senses were gratified. 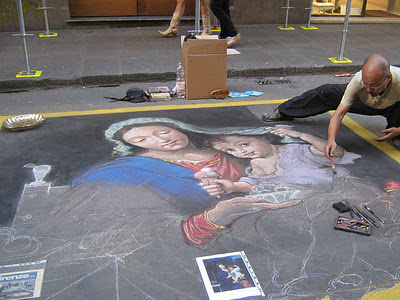 I asked him what he did once he was done with the picture. He smiled and showed me a brush nearby which I assumed meant he swept the road and cleared the painting. I felt gloomy hearing this because for me all that effort to just sweep it up later seemed so futile.But, then again maybe for him its not an art anymore and just a means of sustenance or perhaps both that he does not bother sweeping it up.Maybe he loves the challenge of doing this daily as a performance, entertaining his audience.But somewhere within I felt a lot of respect for this man who did not beg ( I met a lot of beggars in Florence unlike any other cities in Italy I had been to) 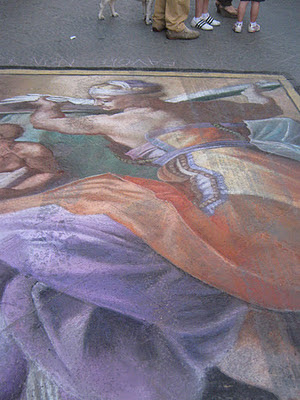 After a point of time I even doubted if he was an illusionist and what if he was mesmerising us with a performance? But then I look at my pics and say nah........ he actually did draw these :)
Posted by The quirk at 9:32 AM

you are really lucky

Its not me but an artist on the roads of Florence who made this. Its beautiful, I agree