By using a title like this I am sure it’ll be difficult for me to put things in perspective and redeem myself. But let me give it a try. I like to cut, but not in a psychopathic way, and certainly not myself in a sado-masochistic way, or masochistic even. I am sure it has nothing to do with flesh, well sometimes, and in no way related to blood. So the least I can assure you so far is that my liking to do it is not directed on humans and it doesn’t cause pain either. Even then I sometimes think that there would just be a thin line separating; or a world’s difference, depending on which side of the debate you are, my penchant for it from that of a psychopath’s. Because, unlike them, I like to exercise by predilection in inanimate objects or after it is made inanimate.

The earliest memories I have of getting mesmerized by a sharp object was the razor blade, the 7’O clock or the Wilkinson types, used in the saloons even now. Dad used a conventional razor and I used to look out for blades, when he was done using one. Even though it would have lost the shine and glint, it was potent enough to cut through papers, plastics, vegetables and anything else which used to catch my fancy. What fascinated me was the fineness with which the blade used to cut through things and even though it was not the strongest of the lot, it had a sharpness which is difficult to rival even now. On special occasions, say if I would have got hold of a styrofoam piece, I would snitch a new blade from dad’s inventory and running that sharp blade through the things would give me unparallel delight, not to mention the smoothness with which the blade would guide through the Styrofoam, smooth like a baby’s bottom. But my joy would be short lived if I get caught in the act of cutting things, and in a very tight spot to explain how I got hold of a brand new razor blade.

And when I had thought nothing would beat the razor blade, in came the surgical blade, courtesy mom, and swept me off my feet. Not that mom gave it to me saying, “young man, how about graduating from a razor blade”. I had to struggle hard to lay my hand on one, because as compared to a razor blade its surgical cousin was kept tucked in high unreachable places, away from the unpredictable sons lingering around in the house, and one would not find a used one either. But what a work of art it was, many folds sharper than a razor blade and many times stronger. It had overcome the flaws of the razor blade, which when used on a styrofoam sheet or block was difficult to maneuver, and unlike a razor blade it had the shape and size to fit perfectly between ones fingers. But it was many years later that I realized its true utility - to cut through skin and flesh. This is where things get a little gory and I would expect small children and expectant mothers to skip to the next paragraph. It was the time I had mastered the catapult and I say ‘mastered’ because I was regularly gunning down small targets like the humming bird or twitchy ones like squirrels (these escapades will be detailed on some other posts later). Somewhere it dawned on me to skin the squirrel and display them as trophies in the house, similar to tigers and leopards. This is when the surgical blade unfailingly did justice to its vocation. Though it was a task the first few times but later on the blade and I were working seamlessly as one. With two potent weapons – the catapult and the surgical blade, I let loose a hunting spree which led to a great migration of squirrels from our colony and it only slackened when the desktop computers arrived on the horizon.

The next time a sharp thing caught my attention was when I was in Kerala and the guy who had come to pluck coconuts showed me his means of livelihood. It is called a ‘Kathal’ or ‘Vettukathi’ at our side of Kerala and the first time I saw it I was transfixed, as if I was looking at a 1911 9mm Desert Eagle. The guy had kept it in mint condition and felt like a collector’s piece. But only when he got about his business that I truly understood its potential. When one is hanging fifty feet above the ground, on a straight and branchless wonder like a coconut tree, one needs tools which will do the job quick, real quick. Not that I was not amazed to see how bunches of coconuts startled falling even before the Kathal kissed them, but when Dad asked the man to trim down an old tree that my eyes truly popped out. Just with two strokes he would chop down mighty branches and what clean cuts it made. Oh! It was magical. Like a hot knife through butter. Later on I pestered dad to buy one for our household use, but we didn’t find one of the same make and size. Apparently it was custom made. On a later date, when I was at mom’s house in Kerala, in no apparent fit of rage or anger, I picked up a Kathal and chopped down many grown up trees, which looked unwanted. Maybe the coconut man’s spirit took hold off my body and worked through me. It was only after copious thrashing and whipping that I regained my senses and was told that the plants were let there to grow into trees and to be sold as timber. After that incident I am very careful in chopping, trees or plants, to be sure no one’s around, lest be caught and thrashed.

I don’t remember if anybody ever asked me what I want to be when I grow up, but I am sure at least once I would have said – I want to be a logger. Now as a city dweller, my passion survives on occasional slicing up of onions, aubergines and potatoes. My favourites are mushrooms. Oh! What joy they give. I hate onions because they do funny things to your eyes and won’t let you do it in peace and it’s usually Bhujji who finishes it for me. As far as the tools are concerned, we have a small collection of shiny knives, big and small. They are not as sharp as the razor or surgical blade and for obvious reasons that things might get out of control in a kitchen and should it fall in the wrong hands - wife’, the husband may be left nursing a cut or stab. I recently got a good meat knife through a friend’s brother in Kuwait, as Bhujji had said they used to get good ones there. This one holds good and feels sharp, though we have not yet used it. I think we both have matured in our relationship and can handle sharp things around us.

P.S. – Yours truly is celebrating his birthday later this month and is open to the idea of receiving sharp and shining objects (stainless steel is preferred, brand not conscious) as gifts. And assures everybody, in writing, that it will be used for cooking purposes only. 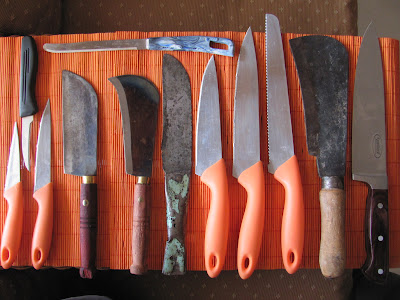 Very original and eye-opening but scary. And that large array of cutting items displayed does not inspire too much confidence either. GULP!

Well written who..will make it a point to get u some knives when we meet up :P

@Parvathi - we should definetly meet...I am already feeling a twitch in my hand...

@SK - Life is sure scary dear.... and we just have those few cutting items to see us through the day.