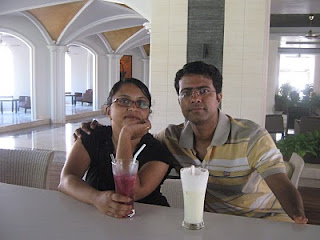 I had wanted to write on this for long but was scared to write it here, on a blog. A) Because there are people who would blame me for writing things personal just to win readership B) The person I am writing about is a part of my life and I was not confident to share about him to the world C) The most important reason is, I have never openly discussed this with him.

I had given up hopes to marry after a couple of rejections. I was told with family problems like mine no one would be interested in marrying me. It sounded fair to me because I came with a chip on my shoulder. And being the eldest also a researcher with no job, with two younger siblings who were unemployed, and a mother who was a widow, it did seem to look like a dismal proposition to many. Last thing I wanted was to be married without my family. I did not want a way out, deserting my family and my responsibilities. And I realized that was what interested many. Many offered marrying me but did not want to take care of my family.

When I first met ‘who’, online to be precise, what struck me was my guide’s words “you can read a man through his words”. I seldom saw people who valued words like gems. I missed noticing a lot of things on 'who’s profile, which did cause a lot of trouble in the journey to altar, and among all those points was the line which had in bold written– DISABLED.

When I responded to the profile, ‘who’ asked me if I saw the disability tab on his profile. It took me some time to realize my blunder; I had said yes to a guy’s proposal without reading something very important. I never missed facts but maybe we were destined to be so I missed it at that time. I felt scared to ask what disability he had but he being generous asked me to see his orkut pics carefully.

I had gone through them already but I had got transfixed at those eyes and never looked elsewhere. I was always poor at marking out people. I opened the album trembling, I had already committed before the pictures, and those ten minutes were the longest anxious minutes I ever had. I was sure if it had to be visible it had to be in the upper half of his body, but if he was deaf , dumb or blind I would never know. But since he said check the pics it should be something more visible, I told myself. I skimmed through a lot of pics with fear and in one pic I saw the baby palm for the first time. ‘Who’ was born with a missing left palm. I looked at his pic for sometime. It didn’t seem ugly but then I tried visualizing his life with one palm. What he could do and what he could not. He won’t ride a pulsar, nor a white horse, what if he could not lift me like those heroes in hindi movies? Would he be able to carry heavy stuff? Questions just ran across my mind. I felt foolish and surprised at those trivial desires I had as a girl, which I was hitherto unaware of. When one decides to marry, having two hands and doing whatever possible with it was a minimum criterion.We hardly ask "Does the guy have two hands?". Obviously , we all want perfect beings and in the bridal market this was no exception.

Often we undermine our left hand, actually a lot, but here I was looking at someone with just one plam. I had never pondered on physical handicap before. But I could feel the weight of rejection suddenly. I had experienced it many times being perfect physically and here was someone who was like me in a different way. My handicap was social , situational and his physical.

I fell in love, though I could not describe it then. I swore if mom agreed that would be god’s indication that ‘who’ was my angel.

I am married to him today. I see him tying his shoe lace, ironing clothes, repairing a tubelight, carrying a gas cylinder and to all who worried if he would tie the wedlock; it was the most memorable moment of my life. He dances with me, washes plates and wakes me up with bed tea. Sometimes it dawns to me that when I type this blog with both hands, he edits it using just one. He works for an MNC where all except him to have two hands, is that not a miracle? and should I not be proud of my little hand. I admit that I often forget about his disability and expect him to work with one arm at the pace of both but to all those anxious well wishers out there all I have to say is “it has not made me stop admiring and loving him”.

I never dreamt of marrying someone with a disability, neither am I showing sympathy or giving a chance to anyone. In fact I grabbed one from the world who failed to see through a shimmering coal. My little hand, does not make me feel ashamed, I love those hidden fingers that held my hand and said “ I do”.

I see him now dancing in the kitchen, he loves to dance and to me those steps are as graceful as anyone on stage. Love solved it all for me, mellowed me, transformed me and the individual who helped me transform had that magical little hand with button like fingers.

bhuji has just opened-up that anyone would be scared to discuss or dared to share life. I also admit with bhuji that Love erases anything that people around point out as mistake. Thankyou Lord for giving this wonderful feeling :)

ahaaa.... looks like sme1 is nw ready to shed her pseudo feminist mask ;). 'valued words like gems'-> seems tht he's a millionaire frm the earlier posts :P. glad tht u r married to ur angel and i bet tht u wont be able to stop admiring or loving him in ur life time. though i've said this before once again congrats to both of u and wish u a very very happy married life.

Dear Teen,
Disability is of different kinds. Physical one is bearable, unlike the emotional one. I hope your unconditional love will help him to live a happy life in the earth than anyone else in the world.....Wish you both a happy and prosperous married life.....

A touching post! U shud know he was riding Hero Puch and Yamaha bikes during the school days :)

Thanks Jijo I know he used to ride Yamaha , he is a great guy. And Jils u dnt get any treats in future. Kalabin and Jency thanks for the comments and wishes. Jayaraj welcome to the blog.

This is the first blog among your series.... ever I felt some respect and liking to you. Wish you a great life ahead.

Wow I did not know you had a lot of disrespect reading the series Mr Anonymous. Jokes apart this was as personal as any other post of mine. I didn't take this decision in life or wrote this post to earn respect but if it has changed your perception......

I felt respect, which doesn't mean there was disrespect to you before. Earlier it was very interesting to skim through your blogs and more interesting to read your reply to comments...Perception about you has changed slightly...and I believe it doesn't matter/bother you if you earned respect/disrespect from some anon because of this blog which are your personal thoughts on a very personal matter :)

this is ur best among all other stories in this blog which I felt...really great yaar...now I respect u a little hehehe...wish u a super married life...

I am surprised at the similarity of comments by Anon 1 and Anon 2 :)

The way the post has been presented shows the constuctive view of a human being.

No man is except from disableness either physical or mental but the courage and will to overcome that counts.