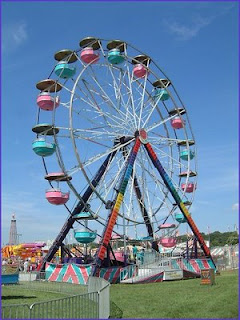 Forty years or so ago a family lived in Nigeria. A father, mother and three angelic children. Youngest of the kids was a boy. His father loved him dearly. The father was the sole bread winner and life in African countries those day weren’t that easy( it isn’t even today, I believe). Engineers were paid well but amenities still weren’t great. One day the father and son decided to go to a local carnival. Carnivals are always a relief to kids and in an arid land with few entertainment facilities it definitely would have been a life saver to many( ask me if u don’t believe). The boy was happy roaming around the stalls and buying toys and sweets when he spotted the giant wheel. The next is imaginable, the boy requested the father to permit him to have a ride. Father was hesitant as he feared giant wheels. Whining the son won the permission and got on to the Giant wheel. The father stayed back watching his son smiling as the wheel went up and down. As the wheel was taking the last round there was a lot of commotion and the father turned around to see children screaming from the immobile giant wheel. His own son was way up screaming for help. Power failure people screamed and children frightened began wailing. The son stood in his seat and yelled ‘papa’. Perhaps out of fear that his son would fall and get hurt the father yelled back asking him to sit there. But perhaps father was too scared that his son was hurt he screamed so loudly that he hit the ground with an attack of cardiac arrest.

A family lost their entire support in a foreign land, the mother was left to manage her children and realised she could not in a foreign and left for India. The body had to be buried in the foreign land because transferring it to India was not easy those days. The four year old boy lived with the guilt of having killed his father because of a little desire of his.

Years later the mother passed away wishing she could see her husband’s grave once before she dies. The son lived haunted all his life with the burden of guilt , making him paranoid, seeking an answer to a 5 year old's mind“ Did I Kill my father” ? " Did I deny my family what I have given my children and wife ?". He lived with one desire his whole life to go once to that land where he lost his dad. He finally managed to go with his wife after 45 years . He had no memories of the land he lived 45 years ago, things had changed but the cemetery was still the same and he found the deserted grave of his father with the help of an old family friend.

{I intend to write humour always because I have been told people prefer reading humour. But, I happen to stumble upon topics that might seem sad, and emotional. But I often feel they deserve to be told. Many of them are not my own experiences, they are stories retold, and they have real authors who lived it. I find people very interesting and their stories even more. So bear with me another living account.

I worked for a year in a funding agency for the Ministry of Rural Development. Meetings to decide funding of projects were common those days. In one such meeting I encountered a lady. A very knowledgeable woman. We were the only women in the meeting and I was thrilled to speak in my mother tongue after a long time. (I worked in North Karnataka)

We decided to have a brisk walk in the busiest part of Bangalore city the roads in between the Kempegowda bus stand and Bangalore railway station. After watching peddlers sell fruits, Bombay mithai and smuggled electronic items, we decided to have a cup of tea. We did not speak for long anything personal. We discussed prospective careers in development sectors and attitude of youth to social work profession.
She then told me a story, her husband’s story. Which is what you have read above}

u marvel us wn u unfold the seals of ur repertoire of anecdotes..and how!!not many ppl possess ur keen sense of observation....naaishe work!!

Hmmmm.. I think i knw you... thanks for the comment and ur comment is a blog in itself and I feel crushed under the weight of ur jargons....:)

We all observe life dnt we?