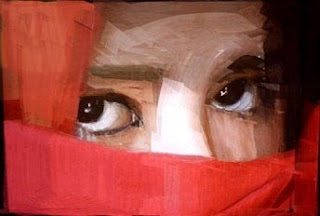 I still have nightmares of that night. Noone would believe me if I say a kid of 3 years could remember that vividly. But I remember those eyes. Those scars , those disheveled hair and that plea for help.I lived in the Gulf . It was perhaps very easy to get domestic help from India those days . I have heard dad say Arab mansions with 10- 15 children required many cooks, servants , drivers and governesses. Many of these servants were from India or other Asian countries. Stories of harassment and ill treatment were nothing new.

One such day When I was cycling in the front of my building with my mother nearby I heard that scream . A woman came running to us and spoke in Tamil which I could not follow, she was asking mom for help as I heard mom explain to dad later. She was being beaten and burnt using cigarettes for not fulfilling her master's desires.It's after I grew up I understood the word " sexual favours".

The jealous wives of the master used to beat her blue when he was not around. Obviously they could not get his attention and feared a new woman taking their place.In the end they schemed to get rid of her by saying she had an affair with the driver. The Arab who took this for her reason of not cooperating with him was torturing her by starving her, burning her using cigarettes and using iron box.He cut her hair to make her look unattractive, prevented her from sleeping for nights and so she escaped when she got a chance. she asked us to call the police.

In a country like that were neither police nor embassy sympathised with a woman
( that too a Foreign National who was domestic help) getting involved with a case was a bad idea , so though mom wanted to dad did not allow her. I saw mom fighting over this for days something I do today , but those eyes begging for help as the Arab dragged her away beating with his shoes still haunts me.

Her half burnt body and ripped off clothes might have made some close their eyes and divert their attention to something pleasant believing world in unfair and nothing could be done.Some would have enjoyed watching it - voyeuristic the society is.

But it took me years to realise what it meant to that three year old, who gets antagonized at any injustice on women and has still not grappled why the world is unjust to her gender.
Posted by The quirk at 12:46 AM

hmm.. nice post about serious issue which is to be taken care off immediately.